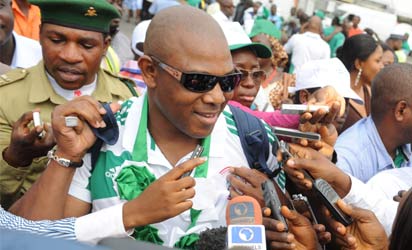 Coach Stephen Keshi has said that his all-conquering Super Eagles side were going to be the target of all African teams when the second round of qualifying race for the 2014 World Cup in Brazil resumes next month.
The Super Eagles returned to the summit of African football a fortnight ago, when the team defeated Burkina Faso 1-0 in the final of the 29th edition of the Africa Cup of Nations, at a packed National Stadium in Johannesburg.
It was the team’s third taste of soccer glory after previous wins in 1994 and 1980. More remarkably was that the victory in South Africa came as a huge surprise given that the team was not amongst the top five favourites to win the trophy.
They also did it without the over-hyped foreign based stars, most of whom, were left out of the 23-man team by Keshi.
Going into the tournament, the Nigerians were considered as outsiders but with their conquest of Africa, Keshi feels that the continent’s attention would be firmly fixed on them.
Nigeria are drawn in Group F, comprising Namibia, Malawi and Kenya, who they open their campaign against on March 22 at the U.J Esuene Stadium in Calabar.
None of Nigeria’s opponents were at the last Nations Cup, leaving the Eagles to fancy their chances of progressing from the pool but speaking during the week, Coach Keshi said that he was not taking anything for granted when the race to qualify for the World Cup in Brazil begins in earnest.
“The eyes of the continent would be fixed on us when the race to qualify for the 2014 World Cup starts next month..We are the African champions, so I expect that other teams would be bidding to get the better of us when they meet us. It is going to be tough race and I am wary of our opponents.
“I believe that there are no longer minnows in football, so I expect stiff competition from our opponents. They deserve to be where they are now and the fact that we are the champions of Africa has made us the team that others want to beat. They know that if they defeat us that the world would notice them the more.
“We are mindful of these things and are going to approach all the games with the highest sense of professionalism. It is not going to be easy but we are equal to the challenge and hope that at the end of the race that we would be the ones smiling”, added Keshi, who is the only Nigerian coach to win the African Cup of Nations as a player and coach. He is also the second African to win the competition as a player and coach.
Mohammed El-Gohary, an Egyptian, is the other African, who won the competition, as a coach and player, with the same national team.
Posted by AB4CHRIST at 00:09