Imo State Police Command recorded another success in its renewed fight against crime and criminals, following the bursting of child trafficking and baby factory syndicate in the state. 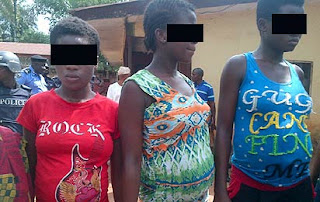 Disclosing this to newsmen Thursday evening, at the State Police Headquarters, Owerri, the Commissioner of Police, Mr. Mohammed Katsina, said the Command has clamped down on illegal motherless babies homes, as well as rescued 17 pregnant teenagers. (Some of the pregnant teens pictured above)


According to the Imo police boss, one of the illegal homes, Ahamefula Motherless Babies Home, located in Umuaka, Njaba local council area, is allegedly owned by a middle aged woman simply identified as “Madam One Thousand”.

Mr. Katsina equally disclosed that during the police raid, no fewer than 11 minors, who were possibly waiting to be sold to prospective buyers, were rescued by the Command.

The bizarre aspect of the police finding was that a 23-year old boy, simply identified as Oyibo, was fingered as being responsible for impregnating the expectant girls, whose ages ranged between 14 and 17.

Apart from being in varying stages of pregnancy, the girls who equally looked malnourished and not properly catered for wept uncontrollably as they were paraded by the police in Owerri.

On how the Command burst the syndicate, the Commissioner explained that the illegal babies home was successfully raided by the “Ambush Squad” after a credible tip-off.

“The prime suspect is now at large. She was was producing pure water sachets as a decoy to deceive unsuspecting members of the public about what was really going on in the premises”, the Commissioner of Police recounted.

Continuing, Mr. Katsina said: “When the police invaded the tightly secured compound, 17 minors were seen holed up in different rooms in the large compound with some of their children playing around”.

The Imo police boss equally paraded the 55-year old security man, Mr. Uzoamaka Okoli, from Nempi, Oru West local government area of the state, employed by the fleeing owner of the babies home.
The 23-year old Oyibo, who was equally paraded by the Commissioner, has allegedly confessed to being responsible for all the pregnancies.
Posted by AB4CHRIST at 23:12