Boko Haram: We did not declare ceasefire – Shekau

…AQIM commanders killed in Mali, Chad…
MAIDUGURI—BARELY 24 hours after the Boko Haram sect denied a ceasefire and dialogue with the Federal Government, gunmen suspected to be members of the sect attacked the Monguno Military Barracks in Borno State. They were repelled by men of the Forward Operation Base, FOB, and Joint Task Force, JTF, who killed about 20 of the sect members in the early hours of Sunday.
A statement issued by JTF spokesman, Lt. Col Sagir Musa, said gunmen came in four SUV vehicles and eight motorcycles to attack the military barracks at Monguno, a border town with Chad Republic.
The town is 175 kilometres north of Maiduguri, the epicentre of activities of the Islamist sect. The clash lasted over an hour. He said apart from killing some of the suspects, it recovered arms and ammunition, including 10 units of Rocket Propelled Grenades, RPG, and two RPG tubes.
JTF’s statement
The statement said: “Information available to the Joint Task Force operation indicated that some Boko Haram Terrorists attempted to attack a military barracks at Monguno, Monguno Local Government Area, Borno State at 5am today (yesterday).
“The attack was repelled by the FOB and JTF troops at the outskirt of the barracks. The encounter led to the death of 20 Boko Haram Terrorists.
“Three four-wheel vehicles and eight motor cycles used by the terrorists were destroyed. Arms and ammunition recovered in the clash include seven Kalashnikov rifles, 10 rocked propelled grendes, two RPG tubes, large quantities of assorted ammunition and eight assorted magazines.”
In a related development yesterday, JTF also arrested two top Boko Haram commanders that were allegedly responsible for the Maiduguri multiple bomb blasts of last Thursday, while 11 governors were holding their meeting on the new All Progressive Congress, APC, party at Government House.
The arrested suspects, according to the statement, are in JTF custody undergoing interrogations. 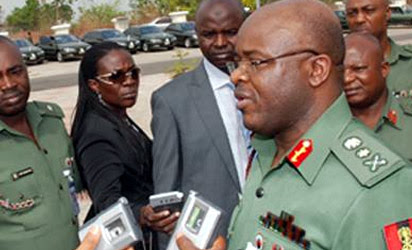 In Mali
Meanwhile, the global war against terrorism in Mali claimed two top Al-Qaeda commanders where the one-eyed terror leader, Mokhtar Belmokhtar, who masterminded the bloody siege and hostage-taking at an Algerian gas plant in January, was killed by Chadian soldiers fighting in Mali.
This came barely 24 hours after another top commander of Al Qaeda in the Islamic Maghreb, AQIM, Adelhamid Abou Zeid, lost his life in the hands of vengeance-seeking Chadian troops who had lost 12 of its men to the Islamists sect in Northern Mali.
Belmoktar is one of the world’s most wanted jihadists and his death has been described as a major blow to Al-Qaeda in the region and a tremendous moral boost to the Chadian troops which had suffered heavy casualties in the hands of the Islamist rebels which have been forced to flee towns they had seized in northern Mali.
Chad
Chad’s President, Idriss Deby, had announced on Friday that his soldiers had killed another Al-Qaeda commander, Abou Zeid, along with 40 other militants who died in a military operation in the Mali’s Adrar des Ifoghas Mountains near the Algerian border.
This was followed on Saturday with another report by Chad’s armed forces in a statement that “On Saturday, March 2, at noon, Chadian armed forces operating in northern Mali completely destroyed a terrorist base. The toll included several dead terrorists, including their leader Mokhtar Belmokhtar.”
Andrew Lebovich, a Dakar-based analyst who follows AQIM, said: “Both men have extensive knowledge of northern Mali and parts of the broader Sahel and deep social and other connections in northern Mali, and the death of both in such a short amount of time will likely have an impact on militants’ operations.”
France, which led the air strikes against the militants’ mountain hideouts, has declined to confirm the killing of either Abou Zeid or Belmokhtar. Similarly, Washington has kept mum on the killing of Belmokhtar. A United States official and a Western diplomat said, however, the reports about Abou Zeid’s death appeared to be credible. 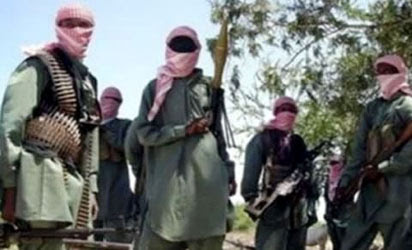 Shekau on ceasefire, dialogue with FG
Shekau, in a video message, denied reaching any ceasefire agreement with, or having a dialogue with the Federal Government.
His translated message reads:  “May the peace and blessings of Allah be upon you all. This is an important message to all people.
“There is this wicked rumour making the rounds that we have dialogued with government of Nigeria which led to a ceasefire on our part. We have also heard how some of our operations and attacks are being credited to criminals.
“As such the security agents have been killing our armed members in the name of criminals. We have seen how our members who were out on holy mission are being attacked and killed with the label of criminals.
“We are telling the world that whoever kills any of our members in the name of being criminals would surely be avenged unless such person repents now. We are stating it categorically that we are not in any dialogue or ceasefire agreement with anyone. And we have never asked anybody in the name Abdulazeez to represent me, Abubakar Shekau, the leader of this movement.
Denies Abdulazeez
“I swear by Allah that Abdulazeez or whatever he is calls himself did not get any authority from me to represent me in any capacity. I do not know him. And if we peradventure encounter Abulazeez and his group, I swear by Allah we are going to mete out the grave judgment that Allah has prescribed for their likes in the holy book.
“I want the world to know that we have no dialogue with government. I have on several occasions attempted to pass this message across via the Internet and Youtube and we later realised that some agents of government kept removing our messages from the net and preventing its online publication so that our messages will not be heard. They know that if the world hears our position on this fake dialogue, their efforts of deceit would be exposed.
Threatens Yobe, Borno, others
“We are also sending this strong message to the people of Yobe, Borno, Bauchi, Kano, Kaduna, Taraba, Adamawa, and any state, that whoever kills any of our members should await a grave retaliation from us.
“God knows that we don’t kill unjustly except those that conspired against us or those that directly fight us, or the government that is waging war upon Allah and His Prophet. We will continue waging war against them until we succeeded in establishing an Islamic state in Nigeria.
“This message is prepared by me and targeted towards clarifying the issue of ceasefire. We have never had any dialogue with anyone. How would we have had dialogue with the government when our members are being killed and detained in cells, both women and children? Do you call this dialogue?
‘We’re workers for Allah’
“That is not dialogue or truce in Islam. In Islam there are condition prescribed for us to go into dialogue, and there are also situation in which we cannot go in to dialogue. What we are doing now is what is prescribed for us by Allah and his holy prophet.
“We are workers in the vine yard of Allah. We are not out to cause destruction, but correct the ills of the society. And Allah is more powerful than all, and He has the might.
“Allah will surely assist us to victory. This is my message to you. If you have not heard from me all this while, now my message should have reached you all.”
Posted by Unknown at 00:21