By KINGSLEY OMONOBI & NDAHI MARAMA, Maiduguri
Less than 12 hours after the leadership of the Boko Haram sect expressed its willingness to suspend further violent attacks as a prelude for dialogue with the Federal Government, unknown gunmen suspected to be terrorists yesterday killed Major General Mamman Shuwa, rtd, shortly before he  left for the Mosque for Jumat prayers in Borno State.
The Defence Headquarters promptly blamed Boko Haram for the killing saying Gen Shuwa was shot dead  at his house in Gwange 1 area of Maiduguri while the General was receiving guests preparatory to going for Juma’at prayers adding that “one of the guests died on the spot while the General died on the way to the University of Maiduguri Teaching Hospital,” contrary to insinuations that ‘’Shuwa was shot  along with five JTF soldiers.” 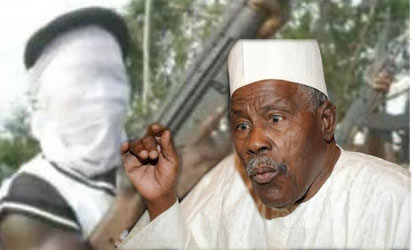 Boko Haram which also demanded that the proposed talks with the government must be brokered by six persons including the former military Head of State, General Muhammadu Buhari but Buhari’s Congress for Progressive Change, CPC, in a statement yesterday, blamed the ruling People’s Democratic Party, PDP, for allegedly orchestrating Buhari’s purported nomination by Boko Haram to divert attention from the ‘’on-going massive looting of their
common patrimony.’’ Shuwa who was over 70 years, was reportedly killed in his Gwange Ward residence in Maiduguri metropolis as he was preparing for the Friday congregational prayers. Gwange Ward is one the identified blackspots in Maiduguri by the Joint Task Force, JTF, even as there had been series of killings and bombing in the area in recent times. A Lieutenant Colonel and Lieutenant attached to the JTF were killed in Gwange sometime ago. Late General Shuwa, a staunch supporter of the ruling ANPP in the state and a strong associate of the former Governor Ali Modu Sheriff, it was learnt was once the commander of Second Division Nigerian Army who led troops that captured important towns during the Nigeria- Biafra Civil War in the sixties. On retirement, he settled with his family in Gwange Ward in his home state. Shuwa’s assassination brings to two, the number of prominent associates of former Governor Sheriff who were murdered within the last three days, the first being Alhaji Mustapha Fulawama who was killed last Wednesday. An eye witness told Saturday Vanguard that Shuwa’s assailants trailed the late general to his house where they forcefully entered at about 12 noon and opened fire on him instantly. A Hospital source at the University of Maiduguri Teaching Hospital where the remains of the deceased were conveyed amid tight security said, the late General died on the way to the hospital. Those who conveyed his corpse to the teaching hospital included the Commissioner of Police Mr.Yuguda Abdullahi and other JTF officials. Confirming the incident through a statement, the JTF Spokesman, Lt. Col. Sagir Musa said: ‘’four people suspected to be General Mamman Shuwa’s guests/visitors entered his house in Gwange at 12:00 hours noon and killed him’’ with one of his guests. Sagir said immediately after the incident, the JTF cordoned off the area and began operation search with a view to arresting the terrorists. Buhari won’t mediate for terrorists — CPC Meanwhile, mixed reactions have continued to pour in from concerned individuals in Borno State who insisted that if a retired General could be killed inside his house inspite of the heavy security around him, there was no hope for the ordinary man on the streets of the troubled Maiduguri. The Borno Elders Forum have at their meetings in Maiduguri, severally called on the Federal Government to withdraw JTF troops from the state, alleging that the presence of soldiers had done more harm than good to the people. Meanwhile, the CPC in its statement entitled, ‘’What is the portent of using Buhari’s in Boko Haram versus Federal Government Parley?’’ stated, ‘’Our attention, in the CPC has been drawn to a widely publicized news that our National Leader, Gen Muhammadu Buhari has been appointed to take part in a Boko Haram/Federal Government parley. As a party, we are convinced that this is the latest gambit in the desire of this organically corrupt PDP-led Federal Government in diverting the attention of the unsuspecting Nigerian public from the on-going massive looting of their common patrimony. ’’Without any scintilla of equivocation, General Muhammadu Buhari has never been directly or remotely connected with any insurrection or insurgency against the Nigerian Nation and her people. He remains the quintessential Patriot that continues to magnetize the very best across the ethno-religious boundaries within the Nigerian nation-space. As we have stated in an earlier communication, the PDP, as a corporate entity, is the harbinger of the insecurity travails of the Nigerian People for the sole reason of ensuring perpetuity in governance. ’’From recollection of events of the last two years, there are three variants of the Boko-Haram: the original Boko-Haram that is at daggers drawn with the Nigerian authority for the extra-judicial killing of their leader; the criminal Boko-Haram that is involved in all criminality for economic reasons and of course, the most lethal of all, the Political Boko-Haram-which this PDP-led Federal Government represents. ’’The President, Dr Good-luck Jonathan had once alerted the nation of the ubiquitous presence of Boko-Haram in his government- a fact aptly amplified by his erstwhile National Security Adviser, General Andrew Azazi. Undoubtedly, the latest revelations by the State Security Services, SSS, on the complicity of the top echelon of the PDP leadership in Boko Haram activities aptly bear testimony of the noxious subterfuge to extirpate the essence of our nationhood. ’’We call on all Nigerians to reject this latest deceptive ploy by this PDP-led government and demand for more transparency in the governance of the Nation. As a Party, we remain unfazed by the cheap propagandist endeavours of the PDP, knowing that Nigerians are the best judge of the under-performance of this regime. God bless Nigeria.’’
Posted by AB4CHRIST at 23:06