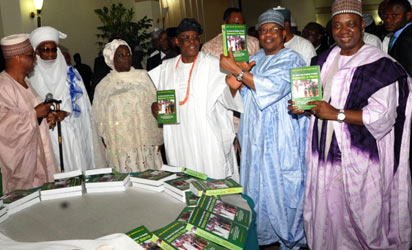 ABUJA -    President Goodluck Jonathan Wednesday said that former Head of State, General Abdulsalami Abubakar rescued the nation at a time when its corporate existence was under threat.President Jonathan who made the remarks in Abuja during the presentation of a book, the “time and legacy’ of former Head of State, General Abdulsalami Alhaji Abubakar, the liberal and solution to stable democracy in Nigeria”, said General Abubakar became the Head of State at such a turbulent time in our nation history.
Commending the efforts of the former military ruler at resolving the political crisis that engulfed the country at that time, Dr. Jonathan noted however that, under the administration of General Abubakar, democracy was restored and the polity was sanitize.

President Jonathan who was represented by Vice President, Arch. Namadi Sambo said the administration of General Abubakar helped to place Nigeria in the enviable position in the comity of democratic nations.
In his remarks, the Chairman of the occasion and former Military President, General Ibrahim Badamosi Babangida commended the courage of General Abubakar who he said successively steered the ship of the nation to stability.

Describing him as a nation builder and detribalised Nigerian leader, General Babangida praised the former Head of State for restoring peace in Nigeria at that time.
According to Jonathan, “General Abdulsalami Abubakar became the Head of State at such a turbulent time in our nation history and when the corporate existence of our nation was under threat.
“On assumption of office, General Abdulsalami Abubakar did not only restore confidence in our body polity, but helped in rejuvenating political  activities which serve as catalogue to foster consensus building among stakeholders in the Nigerian project, thereby placing Nigeria in the enviable position in the comity of democratic nations.
“His conduct of the 1999 general elections helped to usher in a democratic process which is gradually maturing by the day. He among others, allowed the independent of the electoral empire, created an enabling environment for political parties to evolve through genuine participation, robust political belief and principles.
“This really places the cynics at their proper place, who postulated that no successive transition could ever be achieved in Nigeria. Having successively issued a successive transition and enthroned a successful government, he brought into light our 1999 constitution through the promulgation of a Decree to that effect.
“Before going out of office, he ensured that he granted amnesty to state offenders and pardoned those who are considered as enemies of state.  This act further helped to catapult our rising to a progressing and responsible democracy.
“He finally handed over to General Olusegun Obasanjo as the President and Commander in-Chief of the Armed Forces of the Federal Republic of Nigeria on the 29 of May 1999.
“Abdulsalami has earned for himself a reputation as a lover, builder, friend and champion of democracy in Nigeria. Little wonder, his membership of several international negotiation, mediation, peace and conflict resolution committees”, he said.