LAGOS —Security and environmental officials,  yesterday, quarantined a ship laden with  e-waste which they said  is toxic and posed major threat to humans. The ship, M.V Marevia brought in two containers considered very dangerous and sent port officials into a panic mode.
e-Waste consists of old and outdated electronic gadgets and materials such as refrigerators, containing  chlorofluro carbons (CFC) or green house gases. According to Mr Dike Ejiogu, a computer Engineer at the Ikeja Computer Village: “Although some of these gadgets were manufactured for human good, the expiration of the chemicals used in manufacturing them converts them to toxins which ironically becomes injurious to  human health particularly when the gases are inhaled.
“Besides, they are also environmentally unfriendly as they pollute the air and reduce the oxygen  which is the main ingredient of the air we breathe for life” he added.
The vessel which is currently anchored at the Tin-can Island Container Terminal (TICT),  was   quarantined by officials of the National Environmental Standards and Regulations Enforcement Agency (NESREA) with other port agencies keeping vigil on it. 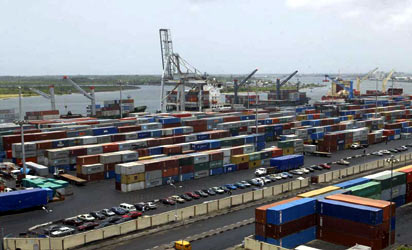 Reliable sources said the vessel which berthed on January 5 originated from Tilbury in England and that the importers were based at Alaba International Market.
Customs confirm report
Confirming this  to Vanguard, Public Relations Officer of Tin-Can Island Command of the Nigeria Customs Service (NCS), Mr. Chris Osunkwo, said that NESREA had written to the Command informing them that they have intelligence report that a vessel which is erroneously called M.V. Mavia, was coming into the country with two container loads of e-waste.
Osunkwo said that the NESREA officials in the letter said  that the vessel should not be allowed to discharge, adding that the inspection would be done onboard the vessel before it is sent back to it’s country of origin. The numbers of the containers are ECMU 9894590 and ECMU 9870858.
Also contacted, Assistant General Manager in charge of Public Affairs of the Nigerian Ports Authority (NPA), Ileya Musa, told Vanguard that the management of Tin-Can Island Port was  aware of the development, adding that the vessel has since been isolated  while  the relevant agencies were on ground awaiting the inspection of the vessel.
On where the ship came from, Musa said he did not know  but promised to get back to our reporter. He never did at press time.
Efforts to get to the area where the vessel was anchored proved abortive but a source at the TICT  told Vanguard that the  crew of the vessel  had told them that the containers were in transit, adding that the final destination was the United Kingdom.
However, a senior Customs officer who spoke with Vanguard on condition of anonymity , explained that the claim might just be a way of avoiding detention by officials of the Nigerian government.
It would be recalled that NESREA had on several occasions detained some vessels that had brought in e-waste into the country.
Some vessels detained before now were MV Maersk Nashville and M.V. Gumel.
Head of NESREA at the port, Mrs. Miranda Amachree, told Vanguard when M.V Gumel was detained that they got intelligence report from their counterparts in Antwerp, Belgium,  that the vessel was bringing used fridges, television sets, compressor pots and batteries.
Amachree explained that the report from Antwerp was a result of the agreement entered into by Nigeria and European countries to do away with CFC, which were brought in by the vessel.
Posted by AB4CHRIST at 22:30