Injured Taraba State Governor, Danbaba Suntai, will soon bounce back to his duty post and shame those who claim that the air crash he was involved in last October damaged his brain, the state Commissioner for Information, Emmanuel Bello, has said.
Bello, told Vanguard in an interview that contrary to insinuations by certain persons that the governor was incapacitated, he would soon return to Nigeria and continue with governance of the state. 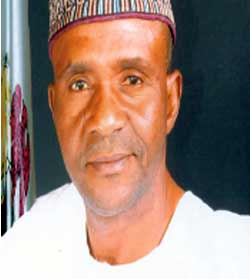 He dispelled claims that the picture showing the governor sitting with his wife and a set of twins born in Germany recently was stage managed by Taraba State Government to deceive Nigerians that the man was fit enough to return to his duty post.According to Bello, the picture did not emanate from Jalingo but from the governor’s friends in Germany, where he is being treated.
The commissioner said, “Look let me tell you the truth, the picture being used in the media did not come from Taraba State but from Germany, it was not generated from Jalingo, as claimed by some persons.
“Governor Danbaba Suntai is coming back any moment from now but I cannot say exactly when. It is the doctors who are attending to him who will decide when he should return home.
“We are not under any pressure to embark on desperate measure since the machinery of government is working perfectly with the Deputy Governor in charge.
“I can tell you that there has been no conflict of any type in the state since the law has stipulated what should be done in times like this and that is what the government has been doing since the accident occurred.
Suntai, an aviation enthusiast, owns two aircraft and a helicopter, crashed near Adamawa State airport on October 25, last year and was later flown to Germany for urgent medical attention following the severity of his injury.
His aides, who were also injured along with him, had been treated in Germany and discharged.