AS the CAF deadline for the submission of team’s final 23-man list approaches, the process of whittling down the number of players in the Super Eagles camp in Faro, Portugal has already commenced.

It has been confirmed that the performance of the players in a training camp in Faro has made Keshi’s job of selecting the best players for the Nations Cup more difficult.

The Eagles spokesman Ben Alaiya confirmed this when he said Stephen Keshi is “growing grey hairs” over picking his squad for the Afcon. According to him, “In fact Keshi at the training on Thursday did not know when he voiced out that he is in trouble as he doesn’t know who to drop.” 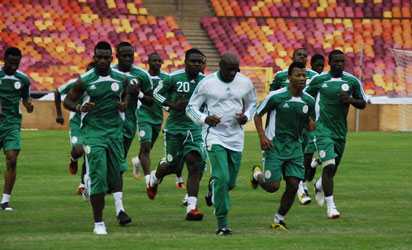 For example, the emergence of Ogenyi Onazi, Rabiu Ibrahim, Nosa Igiebor, Gabriel Reuben, Henry Uche, Raheem Lawal, Obiora Nwankwo and Mikel Obi, the battle for a shirt in the midfield would be tensed. This is because, there are great players who are skilful and can handle the ball very well.

Already, four players out of the 31 in camp were dropped from the team, Sunday, ahead of the naming of the list of 23 players for the  championship.

It will be recalled that Nigeria has closed the Africa Cup of Nations door on Newcastle striker Shola Ameobi after he failed to arrive at the team training camp in Portugal last week.

“The chapter concerning Ameobi is now closed and we are looking ahead to the announcement of the final 23-man squad this week,” Nigeria team spokesman Ben Alaiya told reporters at the camp in Faro.

Newcastle manager Alan Pardew said the player would not be going to South Africa for the tournament without giving a reason.

Meanwhile, following the 1-1 draw earned against star-studded Catalonia in last Wednesday’s friendly, Keshi has said his side would be better prepared before the tournament kicks off.

He said the purpose of the friendly was to try out some formations and tactics and not to win at all cost. “It’s a test and confidence-building game and the boys from back home needed this more. In the next two weeks, we should have a stronger and more reliable team to defend our colours come South Africa 2013.”

Now, over to you! If you were to be the coach, who makes your final list? And who should be among your first eleven?…Your time starts now!