Tampa Is Seen as Social Link for Unfolding Scandal

TAMPA, Fla. — Jill and Scott Kelley moved here about a decade ago, taking up residence in a huge redbrick home with a spectacular view of the water on Bayshore Boulevard, the city’s most fashionable street. They quickly established themselves as social hosts to the powerful four-star officers who run two of the nation’s most important military commands.
Enlarge This Image 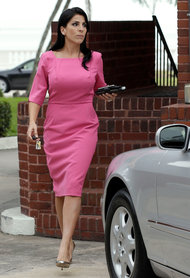 Ms. Kelley, of Tampa, Fla., filed a complaint that led to the Petraeus inquiry.

The Tampa, Fla., home of Jill and Scott Kelley on the city’s most fashionable street.

The Kelleys were known for their lavish parties, with extravagant buffets, flowing Champagne, valet parking and cigars for guests from nearby MacDill Air Force Base, including David H. Petraeus and Gen. John R. Allen, who now commands troops in Afghanistan. “Tampa is the kind of community where, if you’re new to the community, you can carve out your own niche,” said Pam Iorio, the city’s former mayor, who recalls mingling with Mr. Petraeus and his wife, Holly, at the Kelleys’ home. “They decided to carve out a niche with the military.”

Now the social link between Tampa’s military and civilian elite is at the center of an unfolding Washington scandal that has already cost Mr. Petraeus his job as director of the Central Intelligence Agency and has ensnared General Allen, who was Mr. Petraeus’s deputy when he was here from 2008 to 2010.
At the heart of the investigation is the Tampa woman who prompted it: Ms. Kelley, 37, who received threatening anonymous e-mails that set off an F.B.I. investigation revealing that Mr. Petraeus had an affair with his biographer, Paula Broadwell. On Tuesday, General Allen was caught up in the scandal, when the Pentagon said that it was investigating whether he had engaged in “inappropriate communication” with Ms. Kelley; associates of the general say the messages were innocent, and President Obama voiced support for him.

Records show that Ms. Kelley and her husband, a doctor, have been subject to a string of lawsuits over debts, according to a report in The Tampa Bay Times, which said the Kelleys owed a bank nearly $2.2 million, including attorney fees, on a building they own. They also ran a cancer charity, which appears to be defunct. A 2007 tax filing, the latest available, shows the charity raised $157,284 that year, but spent just $58,417 on program services, described as conducting research to improve the lives of terminally ill adult cancer patients.
Their parties, though, were the talk of the town. In February 2010, a gossip column in The Tampa Bay Times reported that Mr. Petraeus and his wife arrived escorted by 28 police officers on motorcycles to a pirate-themed party at the Kelleys’ home, to mark Tampa’s Gasparilla Pirate Fest, an annual event. Guests dined on lamb chops and crab cakes, beside hot dog and funnel cake carts, the paper said.
The couple appeared to be well regarded at MacDill, home to Central Command, which runs the wars in Iraq and Afghanistan and hosts officers from more than 50 foreign countries, and Special Operations Command, which trains commandos for missions like the one that killed Osama bin Laden. The two sit side by side on the base, where generals, admirals and other high-ranking officers live in elegant homes on a spit of land that juts into Tampa Bay. Often, they invite community leaders to social receptions of their own.
Indeed, Mr. Petraeus and his wife grew so close to the Kelleys that they hosted the couple and Ms. Kelley’s twin sister, Natalie Khawam, for Christmas dinner last year. Both General Allen and Mr. Petraeus also wrote letters to a District of Columbia court vouching for Ms. Khawam in a child custody dispute.
That kind of closeness — and the Kelleys’ fancy parties — strike some military people as odd.
“I have never known there to be groupies around generals,” said Jacey Eckhart, the military spouse editor of the Web site military.com. “But just like in every other field of endeavor, there is a certain excitement around people that have great power. And generals, like captains of industry and certain kinds of celebrities, wield a certain kind of power.”
MacDill Air Force Base is a driving force behind the Tampa economy. The local Chamber of Commerce estimates $6.7 billion a year flows into the Tampa Bay area from the base. Military contractors and other defense-related companies dot the city. Business deals are often made in the plentiful strip clubs and steakhouses.
1 2 Next Page »
Michael S. Schmidt reported from Tampa, Fla., and Sheryl Gay Stolberg from Washington. Michael Wines contributed reporting from New York, and Matthew Rosenberg and Ron Nixon from Washington.