Yola – No fewer than 20 persons were feared killed and inmates set free when unknown gunmen, Friday, struck in Maiha, Adamawa state.
Report says the Maiha attack, in the Local Government that shares a common border with Cameroun left many injured.
Eyewitnesses  told Vanguard that the Divisional Police station, the prison, the  Customs area office, the presidential lodge, all located at the local government headquarters were completely razed.
According to eyewitnesses, the gunmen stormed the town at about 3: 00am with heavy artillery.
Vanguard gathered that the gunmen overran the police station, carted away arms and ammunition, then proceeded to the prisons where the inmates were reportedly set free. 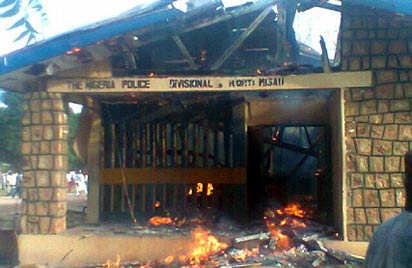 The entire town, according to the eyewitnesses was thrown into pandemonium as residents feared venturing out of their homes.
When contacted, Adamawa State Commissioner of Police, Godfrey Okeke  who confirmed the incident said, “nobody should disturb me now, already I am in Maiha, you people should allow me to rest.”
The Police public Relation Officer,PPRO, Mohammed Ibrahim (DSP), said they (the police) were in Maiha already to assess the situation.