Several aged women in Sonde-Apon, a rural community in Ifo Local Government Area of Ogun State at the weekend stripped themselves almost nude to protest the continued invasion of the community by hoodlums.
According to the aggrieved women, residents of the community can no longer be silent in the face of the evil being perpetrated by these hoodlums. They claimed that they are often attacked, and the most recent one is the third in a row.
The women marched through the streets of the community, chanting emotive songs and sometimes raining expletives on people they accused of turning the community into a dreaded place for its inhabitants. 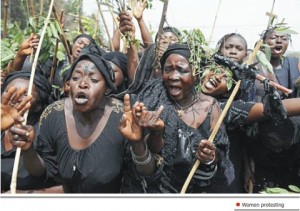 They accused a certain land speculator, whose name could not be ascertained at the time of this report, of sponsoring the hoodlums in a bid to take over a substantial part of the community.
According to reports, whenever the youths, who are always armed, invade the community, they end up inflicting injuries on some of the residents and even raping some of the women.
The latest of the attack was perpetrated by about 20 hoodlums, who invaded the community with machetes and guns while most of the residents had gone to work.
“They carried out serious havoc, injured some of the few people who were around when they stormed our community.
“They carted away belongings of residents. Some women were raped even though they would not want to make issues out of it because of the shame it will bring,” one of the residents narrated.
A female community leader, Chief (Mrs.) Mopelola Losede, Iyalaje of Sonde Apon, who joined the protesters, lamented that when they first came, they attacked the people of the area.
“We petitioned the Inspector General of Police for actions to be taken against them and nothing was done. Now they are at it again. How long should we continue to live in fear because of people who are fighting to take our land by force?? She asked.
She appealed to Governor of the state, Senator Ibikunle Amosun and the IGP, Muhammed Abubakar to come to their aid before they were all wiped out.