ABUJA — A Federal High Court sitting in Abuja, yesterday, admitted into evidence, 250 different explosive making devices allegedly meant to be used by six apprehended members of the Boko Haram sect to attack the venue of an event that was attended by Vice President Namadi Sambo in Kaduna State on July 28, 2011.
However, trial Justice Bilkisu Aliyu, yesterday, declined to take custody of the evidence comprising IEDs and bundles of connector wires, even as she granted the State Security Service, SSS, leave to take them away for safe keeping pending when it would be needed for examination by the court.
Meanwhile, there was palpable tension within and outside the court premises immediately the proof of evidence was brought to court amidst tight security. 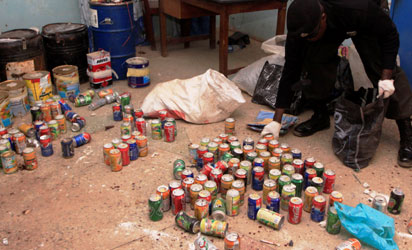 The entire court vicinity was cordoned-off by hordes of security personnel comprising the SSS, Prison officers and armed mobile policemen who mounted sentry at strategic points within the court until further hearing on the case ended yesterday.
It would be recalled that a Senior Army officer who led the team of soldiers that caught the six accused persons while on their way to wreak havoc in Kaduna State, had on December 6, told the court that “the dangerous components of Improvised Explosive Devices, IEDs, we caught them with, if you prime them, it can in matter of seconds bring down the whole of this high court building.”
The witness whose identity was masked owing to the sensitive nature of the case, previously told the court that in a bid to beat the security checkpoint mounted by soldiers at Gummel Junction at Kachia in Kaduna, the suspects hid themselves inside a trailer covered with tarpaulin.
Before the case was subsequently adjourned till January 9, 2013 for further hearing, a radioactive expert with the SSS, Mr Michael Adebayo, in his testimony, yesterday, told the court that the explosives could be easily triggered by constant contact, noting that as such, it would be dangerous to bring them out in the open court for further analysis.
He explained that once the explosives were connected to cordex cables which were also tendered as exhibits before the court, it was capable of razing a five-storey building with over seven thousand metres impact.
Ab-initio, two other prosecution witnesses confirmed that they indeed recovered the items after three of the suspects were arrested in Kaduna State, adding that the other items recovered from the alleged Boko Haram kingpins included four handsets and a black Honda civic car.
Posted by AB4CHRIST at 04:09