Not too long ago the two men and their proxies were at each other’s throats. Now, a confidant of Atiku Abubakar, is claiming that the former vice-president and his one time number one foe, Olusegun Obasanjo are now the best of friends.

Chief Ernest Irek a former member of the House of Representatives and one time coordinator of Atiku’s presidential campaign in Cross River State, is debunking allegations of dissimulation and secret animosity between Obasanjo and Atiku. 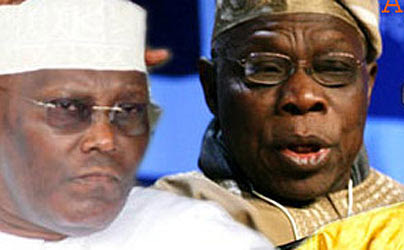 Chief Irek in a telephone interview with Vanguard following a meeting with some of the former vice president’s associates in Calabar reiterated the determination of Atiku’s undying followers to realize their long but often imperiled dream of enthroning their man in the presidency.
He said that the impression in some quarters that there was acrimony between Atiku and Obasanjo was wrong, claiming that the two leaders had resolved any form of misunderstanding they may have had while in office.
“They have been talking to themselves, they have been visiting themselves. Chief Obasanjo has not openly declared his support to Atiku, we know his support is paramount, but for now he does not have any problem with him.
“There was the time Atiku visited him in his Otta farm that was the beginning of the peace meeting and Atiku said this man was my boss, my elder brother, I respect him. In African culture once someone gives you that respect, you are bound to resiprocate, I don’t think he has any problem with Atiku for now,” he said.
Commenting on the outcome of the Southern Nigeria’s Peoples Assembly held recently in Enugu, Irek advised that Nigerians should always bring equity and justice to play in whatever they do.
Irek explained that in one of the meetings held in Warri, Delta State, a prominent politician and an elder statesman from the area had canvassed support for President Goodluck Jonathan, but the Enugu meeting was for the stakeholders to chart a way forward as the 2015 was fast approaching.
The former coordinator said it would be unfair to deny the North the right to take their turn, citing the case of 1999 when the presidential field was left for only southern candidates but wondered why the South should usurp the turn of the North because former President Umaru Yar’Adua died.
Posted by AB4CHRIST at 23:33