Former Military president, General Ibrahim Badamosi Babangida (rtd), yesterday undertook a critical view of the predictions made by soothsayers, including the United States of America that Nigeria will disintegrate in 2015 and suggested ways to ensure the predictions do not become a reality.
General Babangida spoke  where he was the chairman of the public presentation of two books in honour of former External Affairs Minister, Prof. Bolaji Akinyemi at the Nigerian Institute of International Affairs, Victoria Island, Lagos.
Said he: “As Nigerians, we are aware of the great doubts that have been cast about what 2015 portends for the continuing existence of our nation. I am aware that Nigerians have taken great umbrage at these predictions. Even Lord Lugard who founded what has been called Nigeria gave it a life-span of 100 years. 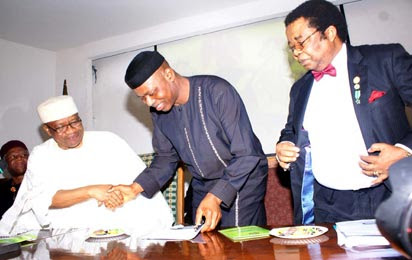 “I regard it as a challenge to our intelligence to ensure that these portends and prophesies do not become self-fulfilling. We should engage these predictions on an intellectual level, testing whether the facts justify the conclusions.

“But on a practical and public policy level, we must import honesty into our public policy assessments. Firstly, we must identify the problems that need to be addressed. Secondly we must address these problems honestly.

“Thirdly we must identify the most current and the most appropriate mechanism for addressing these issues.

“Let me make this clear. My position is not dictated by the fact that foreigners are making these predictions. We don’t even need foreign sources as a reference point. The Nigerian media is awash with alarming news about our problems. My position is dictated by my conviction that Nigeria is precious enough to be saved.

It deserves an investment of our time and resources to make Project Nigeria a success. But the starting point has to be an admission that we need to fix things. We need a new mindset about the Nigerian project. Let us start off by admitting the mistakes of the past. Right policies have at times been wrongly implemented. Temporary solutions have often been turned into permanent policies, even though the problems they were designed to address have long been solved”.

Making suggestions on how to ensure the continued existence of Nigeria beyond the predicted 2015, General Babangida said, “the issue of the principle of federal character needs to be revisited. In a multi-ethnic, multi-cultural and multi-religious nation, the principle of Federal Character is a sensible one and there is no alternative to it. Each national group must be given a feeling of belonging.

“We must admit that sacrifices have been made and sacrifices will continue to be made for the survival of this Nigerian project. In the past, maybe there has not been sufficient recognition of the fact that those making these sacrifices have grievances which should have been addressed.

“Maybe in the past, there had not been sufficient recognition of the fact that each national group has legitimate fears and grievances. Some of the mistakes of the past have now come to haunt us. But let me make one thing clear. Not all these mistakes were made out of callousness or bad faith or malice.

From the creeks in the Niger Delta to the Sahelian areas of the North, Nigeria is under pressure. Now is the time for us to regard the rescue effort as a joint enterprise to secure maximum benefits for all and not an enterprise to secure temporary advantage for one group over another. We need to arrive at a grand consensus that will move this nation forward rather than a panel-beaten system that satisfies no one except the temporary holders of power.

“We can face the challenges together, united in the spirit of a joint enterprise and propelled by the belief in the greatness of this country and a commitment to make Nigeria a source of pride and inspiration to the black race”.

Speaking on the forthcoming centenary celebrations General Babangida said, “in less than a year, in about 11 months and a few days, we as Nigerians will be celebrating 100 years of our existence as a legal united entity. We have cause to rejoice. During these 100 years, Europe has endured two world wars, Russia had gone through a revolution, a civil war and finally gone from being Russia to Soviet Union and back to Russia.

“Yet today, Europe is one of the fastest growing economies in the world. China is destined in a few years to become the biggest economy in the world. Yes, during the past 100 years of our existence, we also have gone through a horrendous civil war. The events that led to the war and the war itself have left lasting effects on all of us, including those who were not even born during those events.

“As other countries have overcome the mistakes in their history and moved on, so we Nigerians also have cause to rejoice that even though in our history we have met with obstacles, we have experienced ups and downs, each generation had sought to the best of its ability to tackle these obstacles. That we are still a united nation is sufficient cause for congratulation.

Our problems are not over. Nation building is not like an electric switch which you turn on and off. It is a continuous process which makes a heavy demand on government and the people”.

Eulogising Prof. Akinyemi, in whose honour the books were being launched, he said “let me say a word or two about the man we are all here to honour today. That he was my first External Affairs Minister is an established fact. That before then he was the Director-General of this Institute, the Nigerian Institute of International Affairs for eight years is also an established fact.

The fact that as part of today’s programme, there is a symposium on the Technical Aid Corps scheme, one of Prof. Akinyemi’s enduring legacy in government, is ample demonstration of the relevance of Prof. Akinyemi to Nigeria’s Foreign Policy.
Posted by Unknown at 00:36