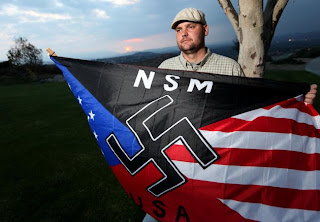 ..RIVERSIDE, Calif. (AP) — The 10-year-old son of a neo-Nazi leader casually told police he had shot his father as he slept but then became agitated in the back of a patrol car and asked an officer if his father would survive, a police officer said.
Officer Michael Foster, who responded to the call of a shooting death on May 1, 2011, testified Tuesday on the first day of the boy's murder trial in Riverside County juvenile court.
"He was sad about it, he wished he hadn't done it," Foster said. "He asked me about things like, 'Do people get more than one life,' things like that. He wanted to know if (the father) was dead or if he just had injuries."
Jeff Hall, 32, was an out-of-work plumber and a regional leader of the National Socialist Movement. He organized rallies at synagogues and a day labor site after his sister-in-law was killed six years ago by a hit-and-run driver who was an illegal immigrant, according to testimony.
In opening statements, however, prosecutor Michael Soccio dismissed defense arguments that Hall's neo-Nazi beliefs "conditioned" the child to kill. The boy was violent, angry and had been expelled from multiple schools, Soccio said.
He also said the boy, now 12, suspected his father was going to leave his stepmother, who had raised him since he was a toddler.
"You'll learn that (the child) would have shot his father even if he'd been a member of the Peace and Freedom Party. It made no difference," Soccio said before showing photos of Hall playing with his children. "They lived a relatively normal life."
The Associated Press is not identifying the child because he is a juvenile. If a judge decides he killed his father, the boy could be held in state custody until he is 23.
Defense attorney Matthew Hardy said his client grew up in an abusive and violent environment and learned it was acceptable to kill people who were a threat.
Hall taught his son to shoot guns, and took him to neo-Nazi rallies and once to the Mexican border to "make sure he knew what to do to protect this place from the Mexicans," Hardy said.
"If you were going to create a monster, if you were going to create a killer, what would you do?" he said. "You'd put him in a house where there's domestic violence, child abuse, racism."
The defense suggested that the boy's stepmother, Krista McCary, goaded the child into killing Hall because her husband planned to leave her for another woman.
McCary told a police officer at the scene that she had killed her husband, but testified she had lied to protect her stepson. She has pleaded guilty to one felony count of child endangerment and criminal storage of a firearm in the case, said John Hall, district attorney spokesman, who is not related to the victim.
The bespectacled brown-haired boy in a purple polo shirt sat quietly in court next to his attorney. He showed little emotion as the prosecution showed photos of his blood-spattered father. He appeared to be taking notes, and on several occasions asked his attorney for the spellings of witnesses' names as they testified.

Prosecutors say the boy intended to kill his father and saw an opportunity when Hall came home after drinking and fell asleep on the couch. The boy got a gun from his parents' room and shot Hall at near point-blank range behind his left ear, Soccio said.
"He held the gun about a foot away and, as he explained, he took four fingers and put them into the trigger and pulled the trigger back, and the gun discharged," Soccio said.
Several police officers testified that the boy and at least one sibling voluntarily gave statements immediately after the shooting that indicated the boy had killed his father.
One younger sister asked the boy why he hadn't shot their father in the stomach as he said he planned to do, according to Officer Robert Monreal, who picked up the exchange on a belt recorder.
McCary testified that she and Hall hosted a group meeting the day before the shooting and drank whiskey shots with their guests. Hall drove guests home and sent McCary three profanity-laced text messages saying he wanted a divorce and ordering her to move out.
The couple argued when he returned home because he was seeing another woman, McCary said. They live in Riverside County, in recession-battered suburbs east of Los Angeles.
McCary said she awoke to a loud noise and came downstairs to find her husband on the couch bleeding from the head. Her stepson came downstairs, stopped halfway and confessed, she said.
"He said, 'I shot Dad.' And I said, 'Why?'" she said. "He didn't answer."
Foster said after police arrived, the boy talked almost non-stop and moved constantly in the backseat of the squad car. He apologized to Foster several times for the killing and asked if he would be arrested, he said.
The boy has a history of violence, starting at age 5 when he stabbed a teacher with a pencil on the first day of kindergarten, Soccio said. He tried to strangle a teacher with a telephone cord years later, he said.
McCary testified the boy had been expelled from six schools and was eventually home-schooled.
Hall and the boy's biological mother had an acrimonious divorce and custody dispute in which each accused the other of child abuse. Social service workers visited Hall's home multiple times but never removed the children from his custody.
Kathleen M. Heide, a University of South Florida professor and author of "Why Kids Kill Parents," said children 10 and under rarely kill their parents. Only 16 such cases were documented between 1996 and 2007, she said.
Posted by AB4CHRIST at 03:22