LAGOS —THE Christian Association of Nigeria (CAN) and the Catholic Archbishop of Lagos Metropolitan See, have joined other well meaning Nigerians to condemn the latest act of terrorism at the St. John’s Catholic Church in Bauchi State, which killed five persons and left several others injured, describing it as barbaric and unacceptable. 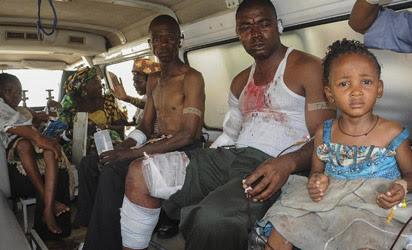 Victims of a suicide bomb attack at St.Johns Catholic church sit in the back of an ambulance in Bauchi Photo: EPA

CAN, in a statement signed by the National Secretary, Rev. Musa Asake said the umbrella body of Christians in Nigeria, received “with shock the bomb explosion at the St. John’s Catholic Cathedral in Bauchi which killed four people when an explosives-packed car reportedly rammed into the line of worshippers waiting to be screened before entering the church.
“CAN commiserates with the families of victims of the bomb explosion, the leadership of the church in Bauchi State and the Catholic Secretariat of Nigeria (CSN) over this dastardly act. It prays that the Almighty God will continue to defend His Church, people and multiply the lots of Christianity in Nigeria.”
CAN noted that the re-launching of violence against Christians and their churches at a time when many Nigerians felt such insurgency had ebbed is instructive, noting “coming on the heels of last week’s attack in Bauchi where some gunmen killed nine Christians and injured five, CAN condemns these deadly attacks.
“We blame these attacks, targeted at Christians in Bauchi, on the shadowy aloofness of the state government which has failed to take precautionary measures and compliment the efforts of Christians in the state. As it is, the state government seems to be unfazed by the calamities happening to Christians. It is sad that after several attacks on Christians in the state, we are still unable to put our fingers on the government’s ability to secure the lives, property of Christians and their churches”.
The statement added that while CAN believes that Christians and well-meaning Muslims should continue to work together for the attainment of peace in the land, it is convinced that Muslim leaders in the North can end this orgy of violence and blood-letting by fishing out elements in their midst whose intention is to give their religion a bad name.
“From what we see from these planned attacks on Christians, churches, Islamic clerics and traditional rulers who are not in support of their nefarious activities, government institutions and properties of privately run business concerns, the economy of the region may be plundered beyond redemption,” the statement added.
In his reaction, the new Catholic Archbishop of Lagos Diocese, Most Rev. Alfred Adewale Martins, expressed shock at the renewed attack targeted at innocent worshippers who were at their respective worship centres to reverence their God.
“For some time now we have thought that things are getting to normalcy but it erupted again. It is very very sad. It is completely unthinkable for people to go after somebody you have never seen or had any dealings with before. That brings us to the clamour for national dialogue to address the very fundamental issues of nationhood,” he stated.
The archbishop kept asking; ‘what do they want? What do they want? The government said they were dialoguing, what is the outcome of the dialogue?’ He was of the opinion that the current political arrangement is extremely expensive and lopsided that it will be difficult for the nation to achieve any meaningful progress.
Posted by Unknown at 00:57