ABUJA— Embattled former Speaker of the House of Representatives, Dimeji Bankole, yesterday, moved to avert his possible re-arraignment by the Economic and Financial Crimes Commission, EFCC, over an amended 16-count criminal charge bordering on contract inflation and abuse of office.
It would be recalled that the anti-graft agency had on June 7, 2011, docked the ex-speaker before the Abuja Division of the Federal High Court on allegation that he connived with some persons at large to defraud the Federal Government to the tune of N894million.
EFCC, through its prosecuting counsel, Mr Festus Keyamo, alleged that Bankole rigged bid for the purchase of three units of Mercedes Benz S-600 cars, two units of Range Rover vehicles (without bullet proofs) and 400 units of DSTV systems, by refusing to follow  procedures prescribed for public procurements in Sections 17 to 56 of the Public Procurement Act No.14 of 2007. 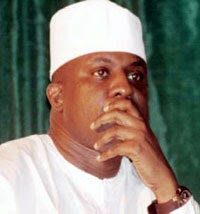 Bankole
It insisted that the action constituted an offence contrary to Section 58(4) (e) of the Public Procurement Act, No.14 of 2007 and punishable under Section 58(5) of the same Act.
EFCC further told the trial court that some of the illicit contracts through which monies were pilfered by the accused person, included the purchase of 400 units of 40-inch Samsung (LNS. 341) television sets, 800 units of Desktop Computers (HP Compaq dc 5700), 100 units of Sharp Digital Copier 5316, 400 units of HP LaserJet 2600N, among others.
Nevertheless, though hearing had already commenced in the matter with so many evidences adduced and witnesses called to testify before the trial court, however, the criminal proceeding is set to commence de-novo (afresh) following the sudden transfer of the judge presiding over the case.
Investigations by Vanguard revealed that the trial judge, Justice Donatus Okorowo, has been ordered to proceed on transfer to Taraba State, though no reason was given for his ouster from the Abuja Division.
Basically, whenever a trial judge hands-off a criminal case, such matter is re-assigned to a new judge who must commence the trial afresh by taking a fresh plea from the accused person.
Meanwhile, perturbed by the development,  Bankole wrote to the Chief Judge of the Federal High Court, Justice Ibrahim Auta, yesterday, begging him to allow the transferred judge to continue presiding over his trial, saying it would ensure that his trial does not suffer undue delay.
Bankole, through his lead counsel, Chief Wale Akonni, SAN, forwarded the letter to the High Court CJ, following the refusal of the transferred trial Judge to sit over the case.
The matter was originally adjourned for continuation of trial yesterday with the court billed to record the oral testimony of the 3rd prosecution witness.
One of the court clerks who spoke to Vanguard on grounds of anonymity, noted that though the entire week was ab-initio dedicated to the trial, owing to the transfer of presiding Justice Okorowo, the case would be put on hold pending the response of the CJ to the former Speaker’s request.
The court had on the last adjourned date, concluded the cross examination of the 2nd prosecution witness, Mr. Adeboye Adeniyi, an investigative officer with the EFCC who tendered letters of agreements that the House of Representatives under Bankole’s leadership, entered with some companies that allegedly took part in the alleged illicit contract deal.
It would be recalled that a lead investigator with the agency, Mr Ibrahim Ahmed who earlier testified before the court, narrated how fake companies were allegedly awarded contracts during the period Bankole held sway at the House of Reps.
The witness said spirited efforts by the agency to trace the benefiting companies proved abortive as they were non-existent.
He said the investigation was prompted by a petition that was lodged before the anti-graft agency by Bankole’s colleagues in the House of Reps, led by Mr Dino Melaye.
“My Lord, after our thorough investigations with the C.A.C, and close perusal of the documents used by the then leadership of the House of Representatives under the accused person in the award of the said contracts, we found out that the contact details of the beneficiary companies were non-existent, letters sent to the purported addresses on the contract papers, were returned two weeks later for reason of non existence of the addresses,” he added.
Meantime, Bankole had earlier queried the legal propriety of the charge against him, contending that “the facts as disclosed in the proof of evidence did not contain the basic elements of the offences charged.”
He argued that “there is no evidence that the accused performed the functions of any named officers under the Public Procurement Act. The court is not to strain itself in holding or connecting the accused person willy-nilly. The evidence before the court shows nothing to connect the accused with the commission of any crime under the Public Procurement Act. The absence of the combination of mensrea with the actus reus is very important” he insisted.
He further begged that court to disqualify the prosecuting counsel, Mr. Keyamo, from the matter, describing him as an agent of witch-hunt, a request that was turned down by the court.
According to him, “The prosecution has urged the court to connect the accused person with commission of offence under the Procurement Act by reason of inference and Section 443 of the Criminal Code Act, Sections 2 (4) and 7 of the Schedule to the Criminal Code Act. The law does not permit the court to assume irregularity in the absence of any shown fact of irregularity.
“The prosecution also urged the court to stretch the law to its utmost limit under Section 57 (2), (3), (4) and 7 of the Public Procurement Act and find commission of crime against the accused person.
“We submit, respectfully, that the act or conduct of the accused which amounted to crime must be shown by clear evidence in the proof of evidence. Respondent submitted that any person howsoever remotely connected with or who had anything to do with a step taken under the Act is liable for a criminal act whether or not there is the intention to commit crime which the law demands. The applicant is not connected to any act in violation with processing of bids or procurement of all the items particularly those alleged in the charges.
“The Public Procurement Act in Section 58 is specific as to who can and must initiate prosecution of offences under the Act. The provision of this Act is specific and any person charged for offence under the Act has the right to know who is prosecuting him and insist on the law being complied with. Indeed neither the court nor parties can confer jurisdiction or compromise illegality.
“It is an issue which the court has authority and power to satisfy itself, so it is a vital issue of law and validity of the proceedings. We submit the decision in the case of FRN V. BODE GEORGE is not relevant here,” he contended.
Posted by Unknown at 00:42