ABUJA — No fewer than $1.62 billion (about N254.39 billion) was placed on the table to enable the Bureau of Public Entreprises, BPE, conclude the long awaited privatisation of six generation companies unbundled from the Power Holding Company of Nigeria, PHCN.
The amount represents various sums of money bidders were requested to pay at different stages from the Expression of Interests, EOIs, from prequalified bidders to the opening of the bids, yesterday. If judiciously utilised, the actual sum eventually realised from the process after the National Council on Privatisation’s, NCP, approval, could go a long way in financing part of Nigeria’s N4.8 trillion national budget for the 2012 financial year. 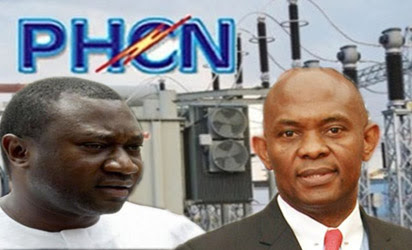 Otedola and Elumelu
The process saw powerful Nigerian investors emerge winners at yesterday’s financial bid process for the Power Holding Company of Nigeria, PHCN, five successor Generation Companies, Gencos, in Abuja. Big names in the nation’s corporate world such as Mr. Tony Elumelu and Femi Otedola grabbed some of the big companies expected to become money spinners in the years ahead.

How winners emerged
The Transcorp and Wood Rock, with Elumelu as chairman, won the bid for Ughelli Power Plc with a bid price of $300 million. The consortium beat two competitors: Amperion Power Distribution Ltd with a bid price of $252million which was, however, declared reserved bidder and Feniks Electricity which wanted to pay $54million for the plant. The Transcorp Consortium has over 35 years worldwide power sector experience in Africa, Europe and Middle East.

Our intent is to leverage time tested expertise  — Elumelu
Commenting on the successful bid, Elumelu, said: “Our intent is to leverage our time tested expertise in turning around businesses in growing the Ughelli Power Plant to a 1000mw generating plant by 2017.”
Also speaking, President/CEO of Transcorp, Mr. Obinna Ufudo, said: “We are excited at this opportunity to contribute to the improvement of power generation in Nigeria while diversifying our operating entities. This is a win-win for the Nigerian public and for our 300,000 plus Nigerian shareholders. Our Consortium prepared this bid with precision, pulling together all the components necessary for the effective turnaround and doubling of the plant’s generating capacity. Our immediate plan is to deploy private sector resources to improve the output of the plant from the current 300MW to over 650MW within the first two years of our take over.”
Similarly, Amperion Power Distribution Ltd, in which consortium, Femi Otedola’s Forte Oil Plc is a member, won the bid for Geregu Power Plc with a bid price of $132 million for 51 per cent of the company’s shares.
Amperion offered $128.520 million for the majority stake in the company but was asked to review its bid because the original bid was below the reserved price, according to the Chairman of the Technical Committee of the NCP, Mr. Atedo Peterside, who presided over the proceedings.
Other members of the Amperion consortium were: BSG Power of Guersney and Shanghai Municipal Electric Power Co. Ltd/ SGCC of China.
Sapele Power Plc went to CMEC/EUAFFRIC Energy with a bid price of $201million as preferred bidder, while JBN-Nestoil PowerServices Ltd was declared reserved bidder with $106.5 million.
JBN-NestOil Power Services Ltd initially offered $80 million for the plant but was told to review the bid upward to at least match the reserved bid price of $106 million.
Mainstream Energy Solutions, promoted by former Kano State military Governor, Col Sani Bello (rtd), won the bid for the concession of Kainji Power Plc at $50.760 million fixed annual fee and a commencement fee of $37.8 million.  Mainstream was the only bidder and had an easy sail since its bid was above the reserved price, according to Peterside.
Mainstream consists of nine companies with RusHydro International and RusHydro JSC of Russia in the team to provide needed technical know-how.  Others are: Amni International Petroleum Development C. Ltd, NIGLEC, Aqua Energy, Confluence Cable Network Ltd, TAK and Anchorage Holdings Nigeria.

Transaction guidelines
According to the rules guiding the transaction, successful bidders will be given 15 days from the day the NCP approves the bid to post a bidder guarantee in form of a Letter of Credit or Bank Guarantee for 15 per cent of the bid amount. Negotiation with BPE would commence thereafter.
Within 15 business days of signing the Concession Agreement or Share Purchase Agreement, a bidder is required to pay 25 per cent of the purchase or concession consideration. The balance of 75 per cent must be paid within six months or at a date agreed between both parties to bring the transaction to a close.
No bid was opened for Afam Power Plc because none of the prospective investors’ technical bids got the required 75 per cent pass mark.
Peterside explained that the hydroplants were being given out on concession because the Federal Government could not sell the water in the rivers to any private organisation.
His words: “The water in the hydro plants is number one asset in the river.  The river belongs to Nigeria.  You can never sell a river.  You cannot sell River Niger.  You can only give it out on concession to operate on River Niger, because depending on what he does, he controls many things downstream. So
as a general rule, you don’t give away your major river in the country. Without a flow of water from the river, there is no power. So, it was a concession plan from the beginning and everybody accepted that.  There was no controversy about it at all.”
In her address earlier, the Director-General of the BPE, Ms Bola Onagoruwa said the bidding process was arrived at after 12 years of hard work among staff of the bureau and its partners, beginning from the National Electric Power Policy.
She said: “The NEPP and the EPSR Act 2005 are unique in that several milestones, apart from the specific objectives of the reform, were put into the documents. From 2000, the BPE, working with its reform partners in the public, private and non-governmental sectors, has worked very hard to meet those specific and general milestones. These past 12 years of hard work have reached a very important milestone — a significant achievement today with this event.”
Chief Executive Officer of the Nigeria Electricity Regulatory Commission, NERC, Mr. Sam Amadi, commended the transparency of the process as according to him, “matter speaks for itself— very transparent and to say that we are looking forward to receiving you at the end of this process.”
He said his organisation was waiting for the bidders to complete the transaction and start buinsess in the sector, with a view to significantly improving power supply in the country.

December 2010: Advertisement for Expressions of Interest, EOIs by NCP.
March 1, 2011: BPE received 271 EIOs and about 91 Prequalified Bidders were told to pay $20,000 each totalling $1.82m.
September 1, 2011: Bidders given access to Virtual Data Room.
July 17, 2012: Deadline for submission of bids, 25 proposals received, and 7-member evaluating committee set up with EFCC, ICPC as observers.
July 18, 2012: Opening of bids with two disqualified and 23 bids accompanied with $2 million bond each or $46 million assigned to evaluating team by balloting and six approved to submit post-qualification bidders guarantee.
Post-qualification security of $15million for Kainji and $10million for others totalling $85 million paid by bidders.
Posted by Unknown at 01:42