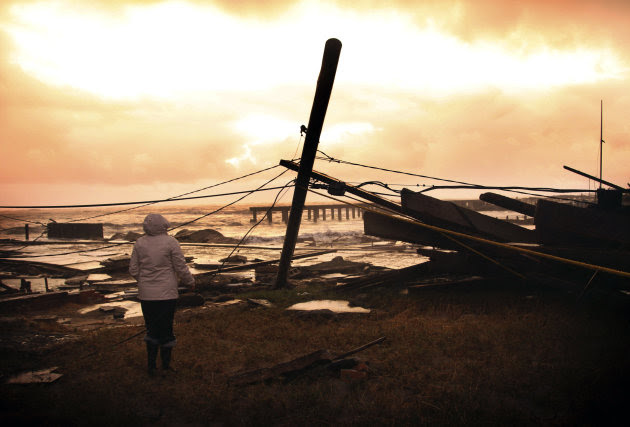 Associated Press/Seth Wenig - Kim Johnson looks over the destruction near her seaside apartment in Atlantic City, N.J., Tuesday, Oct. 30, 2012. Sandy, the storm that made landfall Monday, caused multiple fatalities, …more  halted mass transit and cut power to more than 6 million homes and businesses. (AP Photo/Seth Wenig)  less
PITTSBURGH (AP) — The most devastating storm in decades to hit the country's most densely populated region upended man and nature as it rolled back the clock on 21st-century lives, cutting off modern communication and leaving millions without power Tuesday as thousands who fled their water-menaced homes wondered when — if — life would return to normal.
A weakening Sandy, the hurricane turned fearsome superstorm, killed at least 50 people, many hit by falling trees, and still wasn't finished. It inched inland across Pennsylvania, ready to bank toward western New York to dump more of its water and likely cause more havoc Tuesday night.  Behind it: a dazed, inundated New York City, a waterlogged Atlantic Coast and a moonscape of disarray and debris — from unmoored shore-town boardwalks to submerged mass-transit systems to delicate presidential politics.
"Nature," said New York City Mayor Michael Bloomberg, assessing the damage to his city, "is an awful lot more powerful than we are."

More than 8.2 million households were without power in 17 states as far west as Michigan. Nearly 2 million of those were in New York, where large swaths of lower Manhattan lost electricity and entire streets ended up underwater — as did seven subway tunnels between Manhattan and Brooklyn at one point, the Metropolitan Transportation Authority said.

The New York Stock Exchange was closed for a second day from weather, the first time that has happened since a blizzard in 1888. The shutdown of mass transit crippled a city where more than 8.3 million bus, subway and local rail trips are taken each day, and 800,000 vehicles cross bridges run by the transit agency.

NextPrevNext
Consolidated Edison said electricity in and around New York could take a week to restore.
"Everybody knew it was coming. Unfortunately, it was everything they said it was," said Sal Novello, a construction executive who rode out the storm with his wife, Lori, in the Long Island town of Lindenhurst, and ended up with 7 feet of water in the basement.
The scope of the storm's damage wasn't known yet. Though early predictions of river flooding in Sandy's inland path were petering out, colder temperatures made snow the main product of Sandy's slow march from the sea. Parts of the West Virginia mountains were blanketed with 2 feet of snow by Tuesday afternoon, and drifts 4 feet deep were reported at Great Smoky Mountains National Park on the Tennessee-North Carolina border.
With Election Day a week away, the storm also threatened to affect the presidential campaign. Federal disaster response, always a dicey political issue, has become even thornier since government mismanagement of Hurricane Katrina in 2005. And poll access and voter turnout, both of which hinge upon how people are impacted by the storm, could help shift the outcome in an extremely close race.

As organized civilization came roaring back Tuesday in the form of emergency response, recharged cellphones and the reassurance of daylight, harrowing stories and pastiches emerged from Maryland north to Rhode Island in the hours after Sandy's howling winds and tidal surges shoved water over seaside barriers, into low-lying streets and up from coastal storm drains.
Images from around the storm-affected areas depicted scenes reminiscent of big-budget disaster movies. In Atlantic City, N.J., a gaping hole remained where once a stretch of boardwalk sat by the sea. In Queens, N.Y., rubble from a fire that destroyed as many as 100 houses in an evacuated beachfront neighborhood jutted into the air at ugly angles against a gray sky. In heavily flooded Hoboken, N.J., across the Hudson River from Manhattan, dozens of yellow cabs sat parked in rows, submerged in murky water to their windshields. At the ground zero construction site in lower Manhattan, seawater rushed into a gaping hole under harsh floodlights.
One of the most dramatic tales came from lower Manhattan, where a failed backup generator forced New York University's Langone Medical Center to relocate more than 200 patients, including 20 babies from neonatal intensive care. Dozens of ambulances lined up in the rainy night and the tiny patients were gingerly moved out, some attached to battery-powered respirators as gusts of wind blew their blankets.
In Moonachie, N.J., 10 miles north of Manhattan, water rose to 5 feet within 45 minutes and trapped residents who thought the worst of the storm had passed. Mobile-home park resident Juan Allen said water overflowed a 2-foot wall along a nearby creek, filling the area with 2 to 3 feet of water within 15 minutes. "I saw trees not just knocked down but ripped right out of the ground," he said. "I watched a tree crush a guy's house like a wet sponge."
In a measure of its massive size, waves on southern Lake Michigan rose to a record-tying 20.3 feet. High winds spinning off Sandy's edges clobbered the Cleveland area early Tuesday, uprooting trees, closing schools and flooding major roads along Lake Erie.
Most along the East Coast, though, grappled with an experience like Bertha Weismann of Bridgeport, Conn.— frightening, inconvenient and financially problematic but, overall, endurable. Her garage was flooded and she lost power, but she was grateful. "I feel like we are blessed," she said. "It could have been worse."

The presidential candidates' campaign maneuverings Tuesday revealed the delicacy of the need to look presidential in a crisis without appearing to capitalize on a disaster. President Barack Obama canceled a third straight day of campaigning, scratching events scheduled for Wednesday in swing-state Ohio, in Sandy's path. Republican Mitt Romney resumed his campaign with plans for an Ohio rally billed as a "storm relief event."
And the weather posed challenges a week out for how to get everyone out to vote. On the hard-hit New Jersey coastline, a county elections chief said some polling places on barrier islands will be unusable and have to be moved.
"This is the biggest challenge we've ever had," said George R. Gilmore, chairman of the Ocean County Board of Elections.
By Tuesday afternoon, there were still only hints of the economic impact of the storm.
Forecasting firm IHS Global Insight predicted the storm will end up causing about $20 billion in damages and $10 billion to $30 billion in lost business. Another firm, AIR Worldwide, estimated losses up to $15 billion — big numbers probably offset by reconstruction and repairs that will contribute to longer-term growth.
"The biggest problem is not the first few days but the coming months," said Alan Rubin, an expert in nature disaster recovery.
Airports were shut across the East Coast and far beyond as tens of thousands of travelers found they couldn't get where they were going. John F. Kennedy International Airport in New York and Newark International Airport in New Jersey will reopen at 7 a.m. Wednesday with limited service, but LaGuardia Airport will stay closed, officials said.
Sandy began in the Atlantic and knocked around the Caribbean — killing nearly 70 people — and strengthened into a hurricane as it chugged across the southeastern coast of the United States. By Tuesday night it had ebbed in strength but was joining up with another, more wintry storm — an expected confluence of weather systems that earned it nicknames like "superstorm" and, on Halloween eve, "Frankenstorm."
It became, pretty much everyone agreed Tuesday, the weather event of a lifetime — and one shared vigorously on social media by people in Sandy's path who took eye-popping photographs as the storm blew through, then shared them with the world by the blue light of their smartphones.
On Twitter, Facebook and the photo-sharing service Instagram, people tried to connect, reassure relatives and make sense of what was happening — and, in many cases, work to authenticate reports of destruction and storm surges. They posted and passed around images and real-time updates at a dizzying rate, wishing each other well and gaping, virtually, at scenes of calamity moments after they unfolded. Among the top terms on Facebook through the night and well into Tuesday, according to the social network: "we are OK," ''made it" and "fine."
By Tuesday evening, the remnants of Sandy were about 50 miles northeast of Pittsburgh, pushing westward with winds of 45 mph. It was expected to turn toward New York State and Canada during the night.
Although weakening as it goes, the storm will continue to bring heavy rain and flooding, said Daniel Brown of the National Hurricane Center in Miami.

Atlantic City's fabled Boardwalk, the first in the nation, lost several blocks when Sandy came through, though the majority of it remained intact even as other Jersey Shore boardwalks were dismantled. What damage could be seen on the coastline Tuesday was, in some locations, staggering — "unthinkable," New Jersey Gov. Chris Christie said of what unfolded along the Jersey Shore, where houses were swept from their foundations and amusement park rides were washed into the ocean. "Beyond anything I thought I would ever see."
Resident Carol Mason returned to her bayfront home to carpets that squished as she stepped on them. She made her final mortgage payment just last week. Facing a mandatory evacuation order, she had tried to ride out the storm at first but then saw the waters rising outside her bathroom window and quickly reconsidered.
"I looked at the bay and saw the fury in it," she said. "I knew it was time to go."
___