With Christie, Obama vows, ‘We will not quit until this is done’ 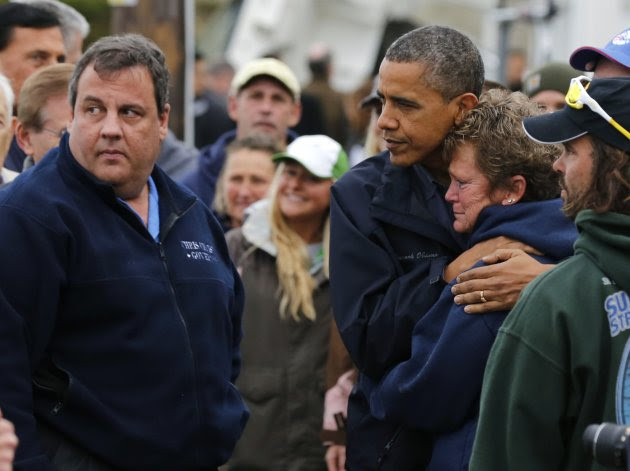 Just six days before the election, President Barack Obama toured storm-ravaged areas with New Jersey Gov. Chris Christie. He told Garden State residents struggling in the superstorm's aftermath that all of America shares their pain—and their government is there to help.
"The main message I wanted to send is the entire country has been watching what's been happening," Obama said Wednesday during a visit to the Brigantine Beach Community Center. "Everybody knows how hard Jersey's been hit."
("Except my boss," shouted Michael Henshaw, 32, a Brigantine resident who works at an insurance company. "Well, except your boss. If you need me to call, you let me know," Obama replied, drawing laughter from the room. That exchange, and many of the details in this post, are from pool reporter Reid Epstein of Politico.)
The White House told reporters that during the worst of the storm's devastation 200 people were sleeping in the center's gym, though that number has dropped to 50. The center still serves as a spot for people to get meals and take hot showers.
Obama traveled to New Jersey, which bore the brunt of the storm's wrath, with Federal Emergency Management Agency chief Craig Fugate. The president and Christie—an outspoken Mitt Romney backer—traded praise over the response to the devastating storm.
"I want to just let you know that your governor is working overtime to make sure that as soon as possible everybody can get back to normal," said Obama. "We are going to be here for the long haul. We're going to not tolerate any red tape. We're not going to tolerate any bureaucracy."
Christie, wearing a blue polar fleece jacket with "CHRIS CHRISTIE GOVERNOR" in white letters over his heart, echoed Obama's message.
"I just want to tell all of you exactly what the president just said. I know he means it," Christie said. "I want to thank the president for coming here today. It's really important to have the president of the United States acknowledge all the suffering that's going on here in New Jersey, and I appreciate it very much. We're going to work together to make sure we get ourselves through this crisis and get everything back to normal. Thank you for coming, sir."
Aides say the president is focused on doing his job, not on the election, but the governor's praise and the seemingly smooth federal response to the storm could help him in his neck-and-neck race with Romney.
Obama and Christie took an aerial tour of some of the destruction aboard the president's Marine One helicopter before the visit to Brigantine.
In brief public remarks afterward, the governor had said of the president, "He has sprung into action immediately to help. He has worked incredibly closely with me since before the storm hit.
"It's been a great working relationship to make sure that we're doing the jobs that people elected us to do, and I cannot thank the president enough for his personal concern and compassion for our state and the people of our state."
(He also joked about those who ignored his "admonition to get the hell out of here. You are forgiven this time, but not for much longer.")
Obama returned the praise, saying Christie had been "responsive" and "aggressive" even before "this incredible storm. ... The people of New Jersey recognize that he has put his heart and soul into making sure that the people of New Jersey bounce back even stronger than before. So I just want to thank him for his extraordinary leadership and partnership."
The president added that "because of some good preparation, the loss of life was kept lower than it might have been."
He then offered his "thoughts and prayers" to those who lost loved ones. "I speak for the whole country," he said.
Both men cited the urgent need to restore power to the vast areas that lost it during the storm.
Obama, who canceled campaign events on Monday, Tuesday and Wednesday to take charge of the federal response, said he had instituted a "15-minute rule" for returning telephone calls from governors and mayors. "If they need something, we'll figure out a way to say 'yes,'" the president said.
"We will not quit until this is done," he promised.
Posted by Unknown at 23:40