Wednesday morning I came across Stephen Keshi at the restaurant of the Suncoast Hotel in Durban. After brief exchange of pleasantries he had to go and freshen up after a long journey. We were to meet at the draw venue, later in the day, and talk.
Let us relive the draw
Started from pot number four, then the third pot was exhausted. Then came pot 2, Nigeria’s pot and all the speculations about Cote Divoire, Ghana and South Africa came to the fore.
Cote D’ivoire was out of the way. Ghana eliminated and only Angola and Nigeria remained in the pot. A2 was drawn and the South Africans held their breadth . Nigeria has always been their Nemesis.
The 2000 capacity Durban International Conference Centre was all hush as Kalusha Bwalya dipped his hands in the bowl and drew….Angola…cheers, joy and relief.
The South African coach was to say later that he was happy to have been drawn against teams that have never beaten South Africa.
The draw to him was very fair, thanks to President Jacob Zuma who earlier on had drawn Cape Verde. Not too many people bother to think that in the FIFA ranking, Cape Verde is superior to South Africa! 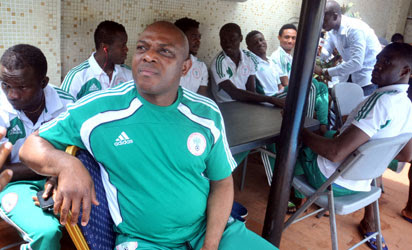 The end of the draw signaled the beginning of interviews and as usual coaches were the focus of attention especially Stephen Keshi who engineered the return of the Eagles to the Nations Cup and whose popularity in Africa spans Togo and Mali……
At the end of it, all I was able to get was a “good night” from a coach who was to wake up the next morning by 5am to inspect training venues, stadium and hotels in the Mbombela Centre where the Eagles will be based with Zambia, Burkina Faso and Ethiopia.

I was not going their way. Allocated the Durban and Johannesburg venue, my inspection was to start very much later.
About four hours later, I got a call from Barrister Chris Green that due to logistics reasons they could not embark on the inspection and will return at a later time. The Nigerian delegation then decided to return to Nigeria even a day earlier.
You can therefore imagine my surprise when I ran into Stephen Keshi in the plane, Friday afternoon.
He said he decided to rest for a day while the others left.
This is where we talked. Where the story starts even as the Six hour flight to Lagos took off.
Our conversation came in various forms. As former students of Saint Finbarr’s College Akoka, as member Technical Committee of NFF and Coach of Super Eagles, of course some of our conversation was off the record.
Is he still celebrating qualification?
Yes and no. He is happy that we have been able to put the ghost of Gabon and Equatorial Guinea behind us, but now the future lies ahead.
He thanks and most profusely too, the Nigeria Football Association under the leadership of Alhaji Maigari for all the support he has received since the campaign started. He is all praise for Governor Liyel Imoke and the good people of Cross River state for hosting the Eagles and to all Nigerians for prayers and for support.
“ We could not do it alone. All Nigerians should share in the glory”
So, what does he think of the draw?
“ Not bad, its OK. Every team that qualified for the draw is a potential danger so we do not take any team for granted”
Yes Zambia was seeded but Burkina Faso is also a threat, he said. Will he go and watch Zambia play against South Africa in a friendly before the Nations Cup? Maybe he will. If not, he will send someone. However since he will see Zambia play before he plays them, he will prefer advance information on Burkina Faso and …..Ethiopia.
What about his relationship with the media? “The media has been wonderful. I have enjoyed tremendous cooperation from them and their role in our success story cannot be relegated. However I will still want them to do more. I want the media to be more patriotic. I know that as Nigerians they are also interested in the success of the team, but we need them to lean more on the side of the team. We are building a young team that can do with more positive write ups than what we are getting now”
I am aware that even as the draw was going on, certain countries approached him for his services.
“ My position is not negotiable. I have a job, besides, for crying out loud, I am coaching my country’s national team and this cannot be compromised. Some of them want to offer me a contract after the Nations cup. Again, I am not available”
Every one has applauded his experiment with domestic league players. What about his relationship with foreign based players and the older ones?.
The big Boss of Nigerian football said that he is surprised that there is a popular belief that he does not relate well with the older players in the Eagles camp. “ …I cannot force any one to play for his country. When I came in initially I noticed that all was not well as the camp was divided along and across various interests. I have succeeded in reintroducing unity and peace into the camp. There is nothing like superiority and preferential treatment anymore. In camp you are a Super Eagles player as any other”
Will he invite Osaze and others?
“Why not? I will, why not? The most important thing is not the invitation but the willingness to play for your country and give it your all.”
Can he talk on Vincent Enyeama? A lot of Nigerians believed that given the negative press that his first choice goalkeeper attracted, he was not likely to be fielded against Liberia but the reverse was the case.
The coach’s countenance changed. He wants Nigerians to accord him the respect of managing the team. Why was Vincent singled out for blame? Every member of the team should be held responsible for any anomaly that befalls the team. Where were the defenders when the ball got to the goalkeeper?.
“.. I have a team to build and to manage and I will not want anyone to destroy the team either psychologically or otherwise. Do you know what damage could have been done to that team if Enyeama was dropped in Calabar? Then other players will go about scared, believing that they will be punished for any mistake committed. That is not the type of spirit that I want in my camp”
Is he really getting value from the home based? He said yes, a lot, and Nigerians will reap in the months to come, although a lot of work is needed even in fitness level, techniques and tactics not helped by a league that is not very strong on the ground.
Is he also getting value from his assistants? “……Absolutely. Yes I have a good technical bench. Forget that sometimes I seem to be doing too much but if you see us in training, I delegate functions and we are fine as a team”
Despite the exclusivity of the Business Class of South African Airways, our discussion was interrupted often by fellow passengers wishing him well. Professor Okon Edet Uya was my lecturer in the University of Calabar.
Had not seen him for close to fifteen years. The former Nigerian Ambassador to Argentina who is now a member of APR Panel of Eminent Persons applauded the coach for the good work done so far. Has extended an invitation to Keshi “…. When next you come to Calabar,  stop by…..and please come along with the Nations Cup….” Laughter.