Biden, the anti-Obama, brings exasperation to debate with Ryan 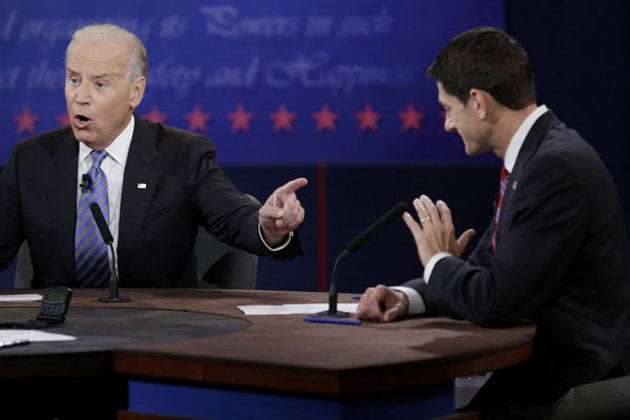 Those hoping for a few true wildman outbursts or gaffes from the easily lampooned Biden were disappointed. The vice president, however, grinning hugely, shaking his head and even giggling during some of his opponent's answers, did seem exasperated with the much younger congressman for most of the debate.
Answering the moderator's first question, about the recent terrorist attack on the American consulate in Benghazi, Libya, Biden, a former chairperson of the Senate Foreign Relations Committee, promised that the Obama administration would "find and bring justice to the men" responsible for the death of Ambassador Chris Stevens and the three other Americans killed during the attack.
Ryan came back with the claim that the president's foreign policy is "making us less safe."

Shortly after, Biden had his first bona fide 'Biden moment': "With all due respect, that's a bunch of malarkey," he said. (Moments later "malarkey" and "malarky" were trending on Twitter.)
As the candidates segued to domestic issues, Biden went after the Romney/Ryan ticket for being on the side of fat cats. "They continue to put the interest of millionaires and billionaires ... ahead of the military and middle class," Biden said.
In response—and attempting to defend Romney's controversial 47 percent remark—Ryan said (to laughter), "I think the vice president knows, sometimes the words don't always come out of your mouth the way you want."

"But I always say what I mean," Biden retorted with a grin.
The vice president did seem to say what he meant for much of the debate, even looking straight at the camera and addressing viewers directly.

On Medicare, Biden asked: "Folks, all you seniors out there, have you been denied choices?" It was a daytime television commercial moment fit for a consummate salesman: there should have been an 800 number for people to dial so Biden could chat with them.
Raddatz also questioned the candidates about their tickets' respective tax plans. Biden pointed his pointer finger at Raddatz and proclaimed for the second time during the debate that Romney and Ryan were intending "to [hold] the middle class hostage."
Ryan, sounding like a wonky accountant running numbers and bobbing his head side to side a bit like a turtle, responded that there aren't enough rich people to pay for the Obama administration's spending. Then, taking a cue from Biden, he addressed the camera directly: "Watch out middle class, the tax bill is coming to you."
(At 9:53 p.m. ET, "Joe Biden's teeth" was also trending on Twitter.)
Ryan also claimed that bipartisanship could make his ticket's vague proposed tax plan work.
"Different than this administration, we actually want to have big, bipartisan agreements," Ryan said, suggesting cooperation could lead to budget cuts that would pay for a 20 percent tax cut across the board for Americans. "Look at what Tip O'Neil and Ronald Reagan did. They worked out of a framework."
"The only way you can find $5 trillion in deductions is to cut deductions for the middle class," Biden said. Otherwise, it's "not mathematically possible."

"It is mathematically possible," Ryan responded. "Jack Kennedy lowered taxes and raised revenue."
This provoked the only line that could possibly count as the debate's real zinger.

"Oh, now you're Jack Kennedy," Biden said, evoking visions of the 1988 vice-presidential debate between Lloyd Bentsen and Dan Quayle. ("Senator, I served with Jack Kennedy, I knew Jack Kennedy, Jack Kennedy was a friend of mine," Bentsen had said. "Senator, you're no Jack Kennedy.")
During that same exchange, the biggest zinger of the night was almost Raddatz's. She asked Ryan directly for details on the tax cuts: "Do you actually have the specifics, or are you still working on it?"
Closing out, Raddatz moved back to foreign policy, covering Afghanistan, and then asked the two Catholic candidates how their faith impacts their views on abortion.

Then, with the debate having grown downright testy, Raddatz said, "Let me calm down things here just for a minute," and asked her last question: "If you were elected, what would you both give to this country as a man, and human being, that no one else could?"
Ryan suggested his capacity to solve problems, but then rattled off statistics about jobs and the economy instead of sticking with the question.

Biden, casual, went broad: "Let me tell ya," he said. "My record stands for itself. Whatever I say, I do. I treat Main Street and Wall Street the same. You grow this country from the middle out, not the top down."
In his closing statement, Biden went again for the emotional connection to viewers that he reached for much of the evening. "You probably detected my frustration with [Ryan and Romney's] attitude toward the American people," he said. "All [the American people] are looking for is an even shot. The president and I are not going to rest until they have a clear shot and peace of mind and can say to their family, 'It's gonna be OK.'"
Ryan, in closing, said: "Wouldn't it be nice to have a job creator in the White House?" he asked. "The choice is clear, and the choice rests with you, and we ask you for your vote."
Posted by AB4CHRIST at 01:02