FIFA to limit number of empty seats in 2014 World Cup

LONDON (AFP) – FIFA vowed Wednesday to limit the number of empty seats to a “strict minimum” during games at the next World Cup in Brazil in 2014.
This summer’s European Championships in Poland and Ukraine and the London Olympics both struggled with empty seats at events that were meant to be sold out. 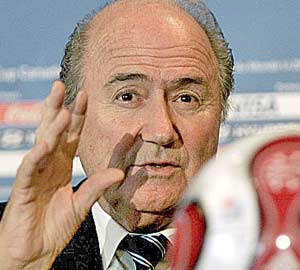 FIFA President Sepp Blatter
FIFA admit it is impossible to eradicate the problem completely but are confident they will have systems in place to avoid similar embarrassment in Brazil.
“Empty seats is always a huge topic,” said FIFA’s marketing director Thierry Weil, speaking at the Leaders in Football conference at Chelsea’s Stamford Bridge stadium in London.
“We are implementing new initiatives, we are implementing new resale platforms.
“There will always be no-shows — as we call it — in the ticketing world, people who, last minute, will not come to the stadium for certain reasons.
“But we will do our maximum to reduce that to a strict minimum.”
Weil confirmed FIFA were revamping the official resale website used at the last World Cup, to allow tickets to be reallocated as late as the day of a game, helped by the fact that no physical ticket will be issued until the day of the match.


One of the biggest complaints during the Olympics was the large blocks of empty seats in some venues in the early stages of competition, which organisers blamed on competitors, team officials and corporate ticketholders failing to show up.
In a bid to counter the corporate issue, Weil said commercial partners would have to provide a list of names of individual attendees “two or three days in advance, so they cannot just say the people will come and then nobody comes”.
He added: “The tickets will only be handed over the day of the game to the people, so you can reallocate tickets to different people, even in the sponsor families.”
Posted by AB4CHRIST at 23:44