He may have since stopped playing football for money and for his country, but former Nigeria captain, Austin Jay Jay Okocha last weekend received plaudits from a former Liverpool Football Club of England star, Dieter Hamann. Hamann, popularly called Didi in his active days as a player, spoke in Lagos at a children’s football clinic organised by Standard Chartered Bank. He said he had always been a keen follower of Nigerian football and was full of praise for players of the golden era of Nigerian football. Dieter Hamann with kids at the clinic “I know this country has a rich history of having produced some of the best talents to have come out of the continent of Africa,” he said, and recalled the likes of Finidi George, Jay Jay Okocha, , Sunday Oliseh, late Rashidi Yekini amongst others. “Jay Jay is a fantastic player whose dexterity and extraordinary skills made him one of the best players of his time. We’ve crossed each other’s path in the last 15 years,” the former Liverpool man said, adding that African players were a delight to work with. Didi who was in Lagos in company of four youth coaches from Liverpool. The clinic also involved women footballers and special footballers from school of the blind. According to Standard Chartered Bank Africa Head of Corporate Affairs, Dan Mobley, the visit was the first of many such visits to come, adding that the bank would leverage on its special relationship with Liverpool FC to bring to Nigeria the best coaches and technical personnel to take on the children on various aspects of the game. 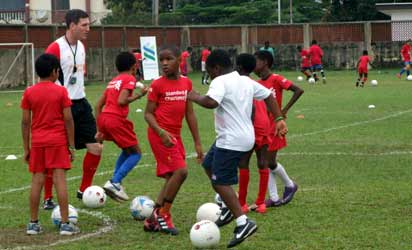