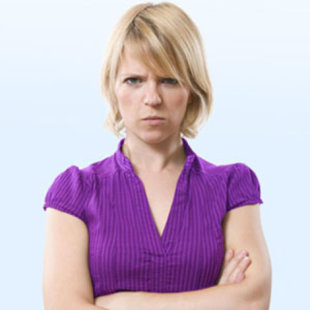 Avoid mom meltdownsIf you've found yourself shrieking at your child - and regretting it - this advice is for you.

My husband, our two kids, and I were enjoying an idyllic trip to Hawaii, driving up the winding (and dangerous) Road to Hana and taking in the beauty of the cliffs and coastline. And then it happened. For no apparent reason, my son, then age 5, threw a water bottle from the backseat toward my husband, and it hit the windshield with a ferocious bang. By some miracle, we didn't crash, but we did lose control...big-time. Both my husband and I were ranting, raving, screaming, threatening: "Why would you do that? Don't you know we could have been killed? Here we are taking you on the vacation of a lifetime, and you throw a water bottle for no reason?" And on and on we went, spewing way more venom than our preschooler could ever deserve or even comprehend, for that matter.
Related: Stop Fighting with Your Kid

Tears began rolling down our son's cheeks, and his lip quivered as he fought back sobs. After what I'm sure seemed like an eternity to him, we calmed down and continued on our way, and I tried to bury the incident in the back of my mind.
I had almost forgotten all about it when, a few weeks later, I replayed our Hawaii-trip video. There I was, recording a waterfall out the window of the car. I tucked the camera into its bag - accidentally leaving it still recording - and then the "water bottle incident" occurred. Though the screen was black, I heard my husband and myself screaming at our son, badgering him, shaming him.
Then it was my turn to fight back tears. How could I have freaked out like that in front of my kids, at my kid? The rant sounded so much more vicious and vile than I remembered its having been, but there it was on tape - proof that I was the worst mother in the world. I may have erased that incident from the vacation video, but I don't think I'll ever be able to erase it from my memory.
Like it or not, most of us parents flip out in front of our dear children from time to time. Sometimes the anger is aimed at them, other times not, but it's almost always a deeply unsettling experience. Fortunately, there are simple - sometimes surprising - steps you can take to repair the damage, not to mention avoid meltdowns in the future.

The High Price of Losing It
First, recognize that regularly lashing out at or in front of your kids isn't par for the parenting course. It can do some very real damage to their psyches, says psychologist Matthew McKay, Ph.D., a professor at the Wright Institute in Berkeley, CA, and coauthor of When Anger Hurts Your Kids. "Studies have shown that parents who express a lot of anger in front of their kids end up with less empathetic children. These kids are more aggressive and more depressed than peers from calmer families, and they perform worse in school. Anger has a way of undermining a kid's ability to adapt to the world," McKay says.
Related: Marriage Myths You Shouldn't Believe
Gulp. And the younger the kid, the bigger the impact, experts say. "When children are little, you're their universe," says psychologist Robert Puff, Ph.D., author of Anger Work: How to Express Your Anger and Still Be Kind. "When you get angry, their world is shaken. By the time they get older, they have friends and other people in their lives to turn to, and that minimizes the impact." Also worth noting: The occasional, nonabusive freak-out is generally much less damaging than regular fireworks, which send a child the message that he or she is not safe and that there's something wrong with him, says McKay.
That said, kids can actually learn an important lesson from seeing you lose your temper and then regain your cool. "This provides an opportunity to show kids that we all get angry, but what really counts is how we repair things afterward," says McKay. Here, the step-by-steps for doing just that.

When You Shriek at Your Kids

Real-mom meltdown: When Jennifer*, of Huntington Beach, CA, went to visit Disneyland with her three kids, she didn't realize the "happiest place on Earth" would be the setting for one of her ugliest parenting moments. "It was a big outing for us, and the park was very hot and crowded that day," she recalls. "Two of my kids have cystic fibrosis and could use a special pass to bypass the lines. But my 13-year-old went and lost his. Out of nowhere, I yelled, 'You've got to be bleeping kidding me. What the hell is wrong with you?' Immediately, my son started to cry. He had never heard me swear or be so mean to him, and he was devastated. Everyone standing around us was looking at me in disgust. I had to keep apologizing. Tears were streaming down my face because I had obviously hurt him so much."
A University of New Hampshire study found that 90 percent of parents admitted to having hollered at their children, ages 2 to 12, within the course of a year (the other 10 percent must have either been angels or had selective memories).

Related: 10 Etiquette Rules You Didn't Know You Were Breaking

To avoid a scream-fest, try this trick: In that white-hot moment of anger, visualize your child as a baby, says Sandra P. Thomas, Ph.D., a professor at the University of Tennessee, Knoxville, and coauthor of Use Your Anger: A Woman's Guide to Empowerment. "Older kids and teens are not adorable like babies, and sometimes they can be very obnoxious," she explains. "When you remember them as the babies they once were, that can do some good."
So can taking a break. "If you're able, take a time-out and walk into another room, even if it's just for a minute or two," says psychologist Laura J. Petracek, Ph.D., author of The Anger Workbook for Women. The key here is getting some literal distance from the situation and recovering your sense of calm.
If your anger has already boiled over, the most important thing now is to own up to what you've done wrong. Don't give in to the temptation to blame your child for triggering your outburst. "Say, 'I am very disappointed at your carelessness, but I shouldn't have yelled like that. It was wrong for me to lose it in that way, and I'm very sorry,' " advises Thomas. (Tip: Don't overdo the apology - if you dwell on it, it can make a kid feel as if he's truly been victimized.) Then promise that you will try your best not to do it again, comfort your child as needed, and move on.

When You Spar With Your Spouse

Real-mom meltdown: Angie*, of Seattle, says life has been particularly stressful since her husband lost his job - and their arguments sometimes play out in front of daughter Lexi, age 3. "Just last night, I was yelling at him for not cleaning the house," she confesses. "Lexi came over, tugged on my shirt, and said, 'Be nice to Daddy.' The look in her eyes was one of terror; it stopped me in my tracks. We eventually made up and tried to assure her that Mommy and Daddy still loved each other, but I don't know if she bought it."
It can be devastating for a child to see her parents get furious with each other, warns Charles Spielberger, Ph.D., a psychologist who specializes in the study of anger at the University of South Florida. It's important to circle back quickly and do damage control. Don't try to explain the situation away by reciting a laundry list of ways in which your spouse provoked you - this will only further embroil your children in the drama and stress. "Instead, you might say, 'I was really mad at your dad earlier. We've talked about it, and we're working it out. People who live together get angry sometimes. We're sorry for yelling. We still love each other,' " Thomas recommends. Even if you still want to throttle your spouse, telling your kids you are smoothing things over will help ease their fears and make them feel more secure.
Related: The Most In-Demand Halloween Costumes For Kids
If you can, emphasize what you'll do differently next time, says Jerry Deffenbacher, Ph.D., professor of psychology at Colorado State University, who studies anger issues; this will help a child learn from the experience. For instance: "I was mad that your dad burned the garlic bread, but I apologize; I shouldn't have shouted at him like that. I was frazzled from a really hard day. Next time, we'll remember to set the kitchen timer when we use the oven."
Keep further comments to a minimum. Overexplain yourself, and you could wind up turning your kid into a mediator or therapist, cautions Puff. There's no need to drag her even deeper into your drama.

When You Argue With a Stranger

Real-mom meltdown: While Fiona*, of Detroit, was buckling her youngest son into his car seat after a trip to a bakery, an older driver pulled up near her and began honking. "He was screaming, 'Close your f--door!' without having given me any warning that I was blocking his spot. I raged right back, 'Can't you see I'm putting my baby in his car seat, you $%*#@?!' My tween in the backseat was pretty rattled by my outburst, and I felt horrible about it."
Your first instinct might be to apologize to your kids for having gotten mad - but don't. Everyone gets angry, so you shouldn't be sorry for having experienced this emotion. (This is especially important if you have daughters - girls from a young age are told they shouldn't show anger, says Puff, encouraging them to bottle up their feelings.)
Instead, tell the kids what set you off. Explains McKay: "You might say, 'That man said something that really hurt my feelings, and I got very upset.' " Next, apologize for how you expressed your anger. "Make sure they know that swearing - or whatever you did - was not the appropriate reaction," says Thomas. "Emphasize that you would never want them to act that way." Also say you are sorry if your outburst scared or embarrassed them. (Let's face it - it probably did.) Explain that you let your emotions get the best of you, and that you'll handle it better next time. And then comes the real challenge: making sure that you do.


Short-Circuiting Your Anger
To keep your cool going forward, follow these ground rules:
-By Julie Taylor
Posted by AB4CHRIST at 23:38

Email ThisBlogThis!Share to TwitterShare to FacebookShare to Pinterest
Labels: LIFESTYLE