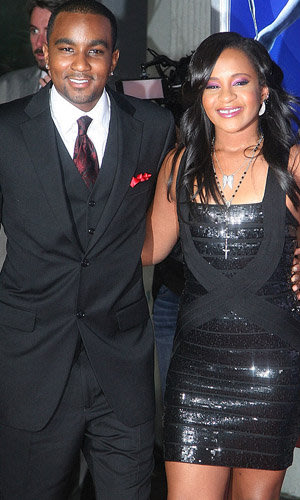 In a promo for "The Houstons: On Our Own" — the reality show about how Whitney Houston's family has been coping after her death — Brown giggles as she breaks the news that she is engaged to 22-year-old Gordon. Let's just say the reaction isn't celebratory — it's more of a stunned silence. Brown's aunt Pat Houston, who was Whitney's manager and best friend, says, "Engagement? This is unacceptable."

Brown's relationship with Gordon — which began after Whitney's death — has raised eyebrows for multiple reasons. First, there's the age factor. Brown is still a teenager. Plus, she's mourning the loss of her mother, who died suddenly in February. But a bigger issue — as you'll see in the clip — is that Houston took Gordon in as a teenager and raised him as her own, alongside Brown. So the family is uncomfortable that the relationship has turned romantic.

"No one knew that from a godson you would turn into a boyfriend," Whitney's brother, Gary Houston, says while confronting Gordon in the clip. Gordon shoots back, "Nobody has to be in my business." Brown's beau goes on to say that the family has wrongly made him out to be "a bad person."

Gordon himself isn't doing much to help his reputation. Late last month he took to his Twitter account to post a photo of himself behind the wheel of a car while pointing a handgun in the air. The photo was later removed from the social media site. In the new issue of People he addressed the controversy, admitting it was a mistake in judgment.

Meanwhile, late last month the Houston family — spearheaded by Whitney's mother, Cissy Houston — filed legal papers asking a Georgia judge to modify the existing terms of the late singing superstar's will. Brown is the sole beneficiary of Houston's estate, so the family wants to restructure the inheritance payouts in an attempt to prevent anyone from trying to take advantage of her. The legal papers stated that Brown is a "highly visible target for those who would exert undue influence over her inheritance and/or to seek to benefit from [her] resources and celebrity." No hearing date has been scheduled on the matter.

We suspect all these topics will be fodder for "The Houstons: On Our Own." The Lifetime series will premiere on Wednesday, October 24.
Posted by AB4CHRIST at 01:07