LAGOS —  Dana Airlines will today conduct its inaugural flight to Abuja, six months after one of its aircraft got involved in a crash that killed all 153 passengers and crew on board and others on ground at Iju Ishaga, Lagos, on June 3, 2012.
Coming barely two weeks after the House of Representatives called for revocation of the airline’s operating licence, the flight, expected to take off in Lagos at 9:45 a.m, would have on board some VIPs, journalists, stakeholders in the aviation sector and celebrities, including Nollywood stars.
The airline’s spokesman, Tony Usidamen, who confirmed this, yesterday, said all arrangements had been concluded for a seamless flight.
Vanguard learnt that Aviation Minister, Princess Stella Oduah, had issued a resumption letter to the airline to recommence operation after series of investigation and test flights by Nigerian Civil Aviation Authority, NCAA.
Usidamen said the resumption came after necessary approval was received from the Federal Government. 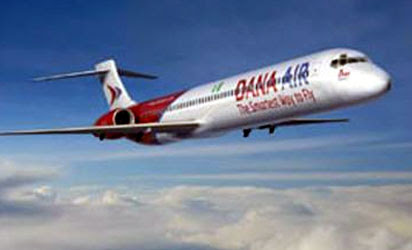 He also confirmed that the airline’s reservation system had been abuzz with intending passengers making their bookings, saying that explained the reason the flight would be real-time.
The Federal Government through the Nigerian Civil Aviation Authority (NCAA) revoked the company’s operating licence, pending proper investigations into the cause of the crash.
In September 2012, the Federal Government reinstated the airline’s licence and allowed it to resume, only with test flights.
In December 2012, NCAA issued a new Air Operators Certificate to Dana Air after it completed the necessary re-certification processes.