ABUJA — Governor Adams Oshiomhole of  Edo State and the Police were, yesterday, locked in a battle of words over the alleged shabby investigation into the murder of his private secretary, Olaitan Oyerinde.
While the governor called for the sack of  the Deputy Inspector General of Police in charge of Force Criminal Investigations Department, Peter Gana, for a shoddy job, the Inspector General of Police, Mohammed Abubakar, said it was only the court that could determine the case, as it was already before the court.
The governor, who spoke while delivering a keynote address at the inauguration of a ‘Code of Conduct for officers and men of  Nigeria Police, noted that the Deputy Commissioner of Police who was sent to investigate the case should ordinarily not be wearing a police uniform.
He called on President Goodluck Jonathan to intervene in the matter, and condemned the AIG for arresting and detaining an innocent human rights activist, rather than going after the culprits who were eventually arrested by the State Security Service, SSS.
Mr IG, I am aggrieved
His words: “Mr. IG, I must say I am aggrieved. I am aggrieved over the murder of my private secretary and the way the investigation was trivialized. I am saying this knowing that the Vice President is here representing Mr. President.
“My secretary was murdered in cold blood and you dispatched a DIG to supervise that investigation. A DIG is a sufficiently senior officer, next in rank to the IGP.
“They came to Benin and did what Fela (Ransome-Kuti) would have called police magic. In the end, they went for a civil rights activist and charged him  with  the offence of murder.”
The governor alleged that the DIG conspired with other officers involved in the investigation to shield the killers of Oyerinde, noting that for this ignoble act, they were no longer fit to wear police uniform.
“The DIG Force CID has a case to answer…  in which case he cannot wear his police uniform.  He must be dismissed. The Deputy Commissioner of Police that he used, who claimed that they have done a thorough job, has no business wearing police uniform.
“The weapon that was used for the murder was used for armed robbery earlier, recovered by the police and under police custody at the time my secretary was murdered.
“So, the man who murdered my secretary was in police custody, the gun used was in police custody and these are the findings of the police.
“The only conclusion that can be reached is that the police ordered the murder of my private secretary. The officer wrote this in black and white.
“I ask you (IG) to read it. He wrote that he has done a thorough job under a very skillful DIG in charge of Force CID and the sky is their limit.  And I am asking the Vice President to report to the President that if they do not find the killers of Olaitan, he can’t expect the people of Edo State and all those who know Olaitan, to have confidence in the security agencies.
“I feel terrible that as a governor, I can’t get justice. If I can’t get justice, then an average Nigerian cannot expect justice and we can’t have justice if we can’t tell the truth.”
Culture of impunity
Oshiomhole lamented that one of the problems of the Nigerian state, including the police, was the culture of impunity where people did things wrongly and got away with it.
He said: “This country cannot be reduced to a banana republic,” adding that when stick and carrot were appropriately applied, the message of discipline would be clear to all. 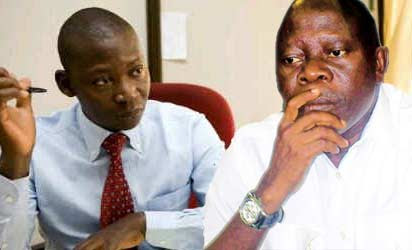 “One of the problems of the Nigerian state, including the police, and even in the civil service, is the culture of impunity that people do things and get away it.”
The governor explained that “sometime ago, in Edo State; let me be specific, a policeman manned an illegal road block contrary to the orders of the IG.

“Members of the public complained and the fact of illegal roadblock was established. It was discovered that a soldier was recruited illegally by an ASP to man this illegal road block and was extorting money.
“In my view, that borders on armed robbery because the man carries arms; without the arms, he cannot subdue the road user to part with his money.
“If you take money with the aid of arms, you are an armed robber. Having arrested the soldier, the army proceeded to do what a responsible force should do, dismissed the soldier.
“But IG, you will be shocked to know and this is not an incident of 10 years ago, that your men in Benin, decided to shield this officer and recently, I learnt that one of them was even promoted.
“While the military dismissed the soldier, the police promoted their own. How can you have discipline in such an environment?  I will plead that you order the dismissal of those policemen today.
“When we begin to apply the stick and carrot appropriately, the message of discipline will be clear.
“The SSS paraded those who killed Olaitan, and I believed that they are the ones who killed him but the DIG from Force CID, working with another junior officer, conspired to shield the actual murderers, parading an innocent civil rights activist, detained for two months without trial in clear disobedience of court order.”
Police ‘ll not victimise any Nigerian—IG
However, the Inspector General of Police, while commenting on the issue, told the governor that the Police under his leadership would not be allowed to victimize any Nigerian, promising that the observations of the governor would be looked into.
He added that the final arbiter of the matter was the court of law, saying though the matter was investigated, it was the court that would determine the case.
“The case is before a trial judge. It is not the duty of the Police to try the case. But I assure you we will do what is right in the matter,” Abubakar said.
Posted by Unknown at 04:42