ABUJA—Director-General of  National Agency for Food and Drug Administration and Control, NAFDAC, Dr. Paul Orhii, yesterday, warned Nigerians not to patronize the drugs announced by Professor Isaiah Ibeh of University of Benin, UNIBEN, as cure for HIV/AIDS.
He said the drug was not subjected to standard scientific protocols before announcement, and needed to be sanctioned.
Disassociating NAFDAC from the announcement, he said the product was never brought to his agency for vetting and neither was it subjected to any known institutional scrutiny. 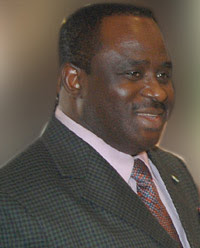 He said: “We have started with disassociating ourselves from the so called cure. We will decide the appropriate sanction. We have invited him for further investigation.
“If our laws don’t have appropriate punishment for such persons who don’t follow scientific protocols in making such pronouncement, we will review the law and ensure that such do not occur again.
“The agency wishes to state that this herbal drug which is claimed to have undergone a series of successful tests has never been presented to the National Agency for Food and Drug Administration and Control for evaluation of efficacy and safety.
”This bogus claim of efficacy without following the appropriate procedure for drug evaluation is capable of misleading the public, especially those that have HIV/AIDs infection as there is no known official or scientifically proven cure for HIV/AIDS infection to date.”
“You may recall that Nigeria had been inundated with similar spurious claims in the past, when individuals announced cure for HIV/AIDS, Hepatitis and Diabetes which later turned out to be false after thorough investigation.
“This is usually at the expense of innocent citizens who have risked their lives, wasted their time and money in search of the elusive cure for their ailments. Nigerians deserve better than to be used as Guinea pigs no matter how noble the intention of the researcher.
“Also recall that in September 2011, NAFDAC arrested the Managing Director of Winners Medical Diagnostics and Research Institute, Dr. Jacob Abdullahi for dealing in expired medicines claimed to be cure for HIV.
“Similarly, in November 2011, one Dr. (Amb) P.S.A. Bondima Young of Bondima Hepatoviral Centre, Jos was apprehended by NAFDAC for administering unregistered drugs on patients for the treatment of Hepatitis.
“I wish to caution other persons who might want to follow the footsteps of Prof. Isaiah Ibeh in making public claims for products whose safety and efficiency have not been scientifically proven to desist from such acts .
“There is a laid down protocol for determining efficacy and safety of new medicines and this must be strictly adhered to by all.”
Posted by Unknown at 04:35