ABUJA—Giant campaign posters, announcing President Goodluck Jonathan’s readiness to contest the 2015 presidential election, greeted Nigerians in Abuja, the nation’s capital, as they woke up to savour the dawn of the New Year.
The all-glossy posters, which were strategically posted in the high brow areas of the Federal Capital Territory, did not however indicate the source or the sponsor of the advertisement.
The launch of the campaign materials contradicts the President’s claim that he has not yet decided on the 2015 poll but concentrating effort on transforming Nigeria in line with his manifesto to give the people a ‘fresh air’.
It was not clear why the sponsors of the message decided to put it out on the first day of the new year but a source familiar with the message pointed out that it was to send a strong message to the opposition that Jonathan was serious about contesting in 2015 and to test the reactions of the Nigerians. 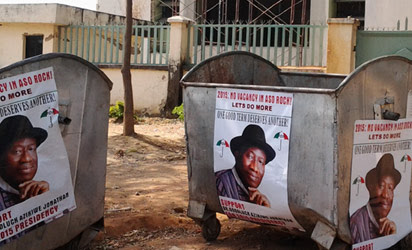 The campaign posters have been spread across the major areas of ECOWAS, Peoples Democratic Party Secretariat in Wuse 5, and the Central Business District, where major government offices are situated.
One of the posters, which had President Goodluck Jonathan’s portrait read, 2015: No vacancy in Aso Rock. Let’s do more. One good term deserves another. Support Dr. Goodluck Azikiwe Jonathan for 2015 Presidency.
Presidency disowns posters
When contacted the Political Adviser to the President, Alhaji Ahmed Gulak disowned the posters saying that they did not emanate from the presidency and that “the president has not authorised anybody to print any campaign poster for him as regards 2015 elections”.
He declared that the president has been “pre-occupied with working to fix Nigeria and did not want to be distracted by undue politicking about 2015”.
The presidential aide further said that the pasting of the posters could be the work of mischief makers who want to deceive Nigerians.
However, in an exclusive interview with Vanguard last month, Okupe had said that when the time was ripe his boss would respond to the issue of 2015, insisting that Mr. President was preoccupied with fixing Nigeria’s problems at the moment.
Okupe pointed out that it was wrong for some Nigerians to try to distract the President from fulfilling his electioneering promises to the nation by bringing up the issue of 2015 presidency.
The aide, however, said the wonderful performance of Jonathan at the end of the tenure would make most Nigerians to compel him to run in 2015.
“Nigerians ‘ll want him to run”
Okupe had said: “I am very certain in my mind that Nigerians are going to applaud him and even if he does not want to run for election, Nigerians are going to force him to run again because of the level of performance.
“Only God and the people of Nigeria will decide what will happen in 2015. But I think what is uppermost in the President’s mind is to solve the basic needs of Nigerians by improving power, infrastructure, roads and check insecurity in the land.
“When he achieves all these, Nigerians will decide what to do with him. In fact, when we get to the bridge we will learn how to cross it. That is what I can say about 2015 for now.”
The poster, it was gathered, was printed by political hawks close to the Presidency in light of recent claims by the opposition to forge an alliance to chase out Jonathan in 2015, coupled with the warning by the Niger Delta former militant leader, Asari Dokubo, to Jonathan not to run in the next election because of poor outing so far.
Posted by Unknown at 23:03