ABUJA —  TROUBLE between the governors elected on the platform of the Peoples Democratic Party, PDP and the National Chairman of the Party, Alhaji Bamanga Tukur, has taken another dimension with the state executives insisting on the sack of Tukur-led National Working Committee, NWC and a caretaker committee inaugurated.
Vanguard gathered, yesterday, that the governors who are already in the nation’s capital, Abuja, will meet with the leader of the party, President Goodluck Jonathan, tomorrow, where they will formally express their grievances to him and call for a caretaker committee that would replace the present NWC when finally dissolved.
The PDP governors who were instrumental to the emergence of members of the NWC will report them to President Jonathan over alleged unsavoury attitude towards them by Tukur in particular.
According to a source, the governors who had wanted to push the case at the National Executive Committee, NEC, if the meeting was held before the Board of Trustees, BoT, will now meet with the President a day after the BoT elections.
Cause of the political quagmire
It was also gathered that members of the NWC are wooing some stakeholders and elders of the party to intervene, just as the cause of the political quagmire between the governors and the leadership of the party is the decision taken on Adamawa State PDP where the executive loyal to Governor Murtala Nyako was sacked.
It would be recalled that Gov. Nyako has been having a running battle with the PDP national leadership over the conduct of PDP primaries in Adamawa State which led to the sack of the state PDP executive committee and the suspension of the National Vice Chairman, North-East, Alhaji Girigiri Lawal, by the NWC. 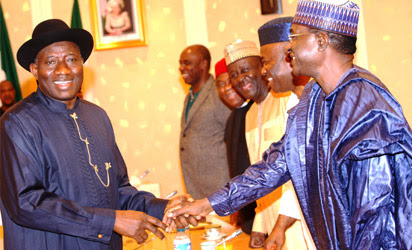 The NWC also dissolved the state PDP executive led by Alhaji Umaru Mijinyawa Kugama that was loyal to the governor and put in place Ambassador Umar Damagun-led nine-member caretaker committee to oversee the affairs of Adamawa PDP.
With the problem not resolved by the NWC and being the home state of Bamanga Tukur, President Jonathan had no option than to put in place an ad-hoc committee with Gov. Sule Lamido of Jigawa as chairman.

Other members, Vanguard gathered, are Gov. Theodore Orji of Abia State, two unnamed members of the National Assembly, three unnamed members of the NWC and the Political Adviser to Vice President Namadi Sambo, Abba Dabo as the Secretary.
Against this backdrop, the governors who were not happy with the leadership of the PDP, had to storm the Wadata Plaza, National Secretariat with the Rivers State governor and Chairman, Nigeria Governors’ Forum, Rotimi Amaechi, leading the team to plea on behalf of their colleague, yet, the decision was not reversed.
Follow-up meeting
Vanguard learnt, yesterday, that at the end of a follow up meeting of the Governor Sule Lamido of Jigawa State- led Adhoc Committee on Resolution of Adamawa State in Abuja Sunday night, it was agreed that the resolutions of the NWC on Adamawa State be declared null and void as the only way forward to the logjam.
The sources said the decision was taken to ensure that if not nipped in the bud, state PDP executive members that were loyal to other  governors would  go through similar experience in the hands of the national leadership of the party.
At the meeting, Vanguard also gathered that members of the Lamido Committee were surprised to observe that there were no meetings of the NWC where the National Secretary, Prince Olagunsoye Oyinlola as well as the National Organizing Secretary, Abubakar Mustapha were mandated to write letters that the congresses in Adamawa State be held, even as they discovered that there were no minutes as well as memo.
At the Sunday meeting, besides the Jigawa State governor were the governor of Abia State, Theodore Orji; the Political Adviser to Vice President Namadi Sambo, Mallam Abba Dabo who is the Secretary of the Committee; National Woman Leader, Chief Kema Chikwe; National Publicity Secretary, Chief Olisa Metuh and National Legal Adviser, Kwon Victor representing the NWC, among others.
Posted by Unknown at 23:03