Barely 24 hours after over ten people were slaughtered in Maiduguri, twenty ladies in mini skirts and trousers were yesterday slaughtered in their separate homes in the metropolis by yet to be identified terrorists.
Also the Joint Task Force, Operation ‘Restore Order’, Friday,  placed a bounty on suspected terrorists and members of Boko Haram.
This ugly development in Maiduguri is one of its kind, as many believed that most of the daily killings in Borno are only targeted at men and security agencies. 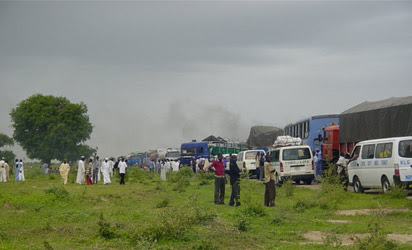 The slaughtering of about twenty different ladies, our correspondent gathered, took place in the early hours of yesterday precisely at about 1 to 2am when most of residents were still asleep in their houses due to the curfew imposed by state government.
A source told our correspondent that the most hit areas were Mary wards, few meters away from the University of Maiduguri,  one of the places accommodating students of the institution living off-Campus due to accommodation shortage.
Also affected according to investigation, were ladies living close to the black spots areas of Gwange, London Chiki, Abbagaram, Kaleri areas where series of killings and bomb blasts had occurred in the past, killing JTF officers.
When contacted on phone, both the JTF spokesman, Lieutenant Colonel Sagir Musa and the Police Commissioner, Mr. Yuguda Abdullahi said that they are not in Maiduguri, the state capital to confirm the incident.
But a top JTF Commander  said, he had directed his men to the affected areas yesterday morning  to evacuate the remains of over twenty girls slaughtered within the Maiduguri metropolis.
N50m bounty placed on Boko Haram leaders

Meanwhile, the Joint Task Force, Operation ‘Restore Order’, Maiduguri, have declared the suspected terrorists wanted and placed a reward on each of them.  They are wanted in connection with terrorist activities particularly in the region that led to the killings, bombings and assassinations of some civilians, religious leaders, traditional rulers, businessmen, politicians, civil servants and security personnel amongst others.  They are also wanted for arson and destruction of properties worth several millions of Naira.
A statement listed 19 alleged senior members of the extremist group blamed for hundreds of deaths in connection with its insurgency in northern and central Nigeria as suspects.
The rewards ranged from N50million for the suspected leader of the group, Abubakar Shekau, to N10 million for various Boko Haram “commanders”.
Lieutenant Colonel Sagir Musa, who issued the statement on behalf of the  Military Task Force operating in the region  did not respond to phone calls. Violence linked to Boko Haram’s insurgency is believed to have left over 3,000 people dead since 2009, including killings of security forces.
Posted by Unknown at 23:18