ABUJA— Gunmen, yesterday, launched an attack on the headquarters of the  Special Anti Robbery Squad, SARS, Abuja believed to be holding suspected Islamist extremists, killing two officers and leading to the escape of 30 detainees.
Police authorities, however, claimed to have re-arrested 25 of the 30 escapees and said no one being held on “terror-related charges” was freed.
The attack on the Special Anti-Robbery Squad compound in the pre-dawn hours resulted in a gun battle, with police claiming to have repelled the assailants and arrested two of them. 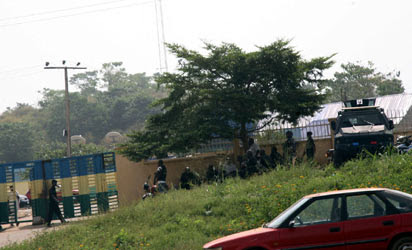 It was not immediately clear who was behind the attack. The raid was similar to others carried out by Islamist extremist group, Boko Haram.
However, a statement signed by Force Spokesman, CSP Frank Mba reads: “In the early hours of today, November 26, 2012, at about 2am, unknown gunmen in large numbers attacked the premises of the Special Anti-Robbery Squad (SARS) of the Federal Territory Police Command.
Policemen on duty responded swiftly and engaged the gunmen in a gun battle that lasted for some minutes, at the end of which the gunmen were successfully repelled.
“However, in the confusion that ensued, about 30 suspects in the detention facilities of SARS broke out of the cells and attempted to escape.  Tactical and coordinated efforts to re-arrest the fleeing suspects yielded instant result.
So far, 25 of the suspects have been re-arrested, while five suspects originally being held in relation to robbery related offences are currently at large.  Two Policemen died during the operation while two of the attackers have been arrested.

“It needs to be emphasized here that no suspect held for terror related charges, escaped from SARS detention facilities.  No explosive or IED-related materials were used in the botched attack”.
Meanwhile, the Inspector-General of Police, Mohammed Abubakar, has personally visited the scene of the incident to assess the situation. He has equally ordered a high-powered investigative panel headed by a Senior Police Officer to investigate the circumstances surrounding the incident.
Members of Boko Haram have carried out scores of attacks in northern and centralNigeria, including police stations and sometimes with the intent of freeing jailed members.
A visit to the scene, revealed that the main gate outside the police unit was heavily guarded. There were two armoured vehicles, six police trucks and more than a dozen armed policemen.
It was not immediately possible to determine whether the complex had suffered damage.
On Friday, the military offered hundreds of thousands of dollars in reward for information leading to the capture of leaders of Boko Haram in a statement that listed 19 alleged senior members of the group.
The rewards ranged from N50 million ($317,000, 245,000 euros) for the suspected leader, Abubakar Shekau, to N10 million for various Boko Haram “commanders”.
Jaji Bombings: Army Chief orders board of inquiry
Meanwhile, 24 hours after terrorists struck at theMilitaryProtestantChurchof the Armed Forces Command and Staff College Jaji, the Chief of Army Staff, Lt. General Azubuike Ihejirika has ordered a board of inquiry to investigate the circumstances surrounding the bombing even as he noted that the bomb attack should have been avoided.
Said General Ihejirika: “The bombing attack of yesterday (Sunday) was a very sad event. A board of inquiry has already been instituted to unravel what happened which we believe could have been avoided”.
The Army Chief who was speaking in Asaba at the opening of the Chief of Army Staff Annual Conference, vowed that despite incessant attacks on the Army, no amount of distraction will deter the Nigerian Army from achieving its objectives as assigned it by the Federal Government which is ridding the nation of terrorists and other elements bent on causing destabilization of the polity.
Disclosing that the Army will remain professional in the conduct of its operation, Ihejirika said: “We will always keep strictly to the rules of engagement” adding “despite the level of propaganda of the Boko Haram terrorists in the plot to discredit the army, we will not be deterred in our resolve to address the current internal security challenges in partnership with other security agencies.
“In the incoming year, our focus is to ensure the mass production of locally manufactured  Armoured Personnel Carriers to meet our operational requirements. Equally, we hope to strengthen the capacity of the Nigerian Army Engineers through acquisition of necessary equipment so that it can take up bigger challenges outside the Nigerian Army”.
Continuing, Ihejirika said: “The outgoing year has indeed been both eventful and challenging for the Nigerian army especially in the fight against terrorism and other criminal activities in the country. This is in addition to maintaining significant presence in troubled spots in the African region e.g.Liberia,Darfurand lately, Guinea Bissau .
“As we speak, elements of ‘Operation Sanity’, coveringKogiState, Damaturu and Mubi, have led to the recovery of 901 assorted weapons, 89, 142 rounds of assorted ammunition, 11 hand grenades, 150 bombs and 555 IEDS”.
General Ihejirika also announced that he and the IGP have agreed to take far reaching measures that will enhance the current efforts at addressing terrorism and other related internal security challenges”.
Similarly, the IGP has ordered water-tight security around all government and Police related facilities nationwide.
“The Police High Command uses this medium to appeal to Nigerians for calm while reassuring them of the Force preparedness to perform its constitutional and statutory responsibilities of providing adequate security for the State and the entire citizenry”, Mba said.
He added:  “The Force therefore, enjoins the public to continue to go about their lawful duty without fear or intimidation as adequate strategies have been put in place to guarantee the general security and safety of all Nigerians”.
Boko Haram member sends letter offering dialogue
A purported senior member of Islamist militant group Boko Haram has distributed a letter requesting talks with the government, a day after a double suicide bombing blamed on the sect killed at least 11 and wounded 30 in an army barracks.
The letter, according to Reuters was signed by Sheik Abu Mohammed Ibn Abdulazeez, a man known by security sources to be a sect member but considered to be a moderate.
If the letter is genuine, it would appear to mark a change of tact for the Islamists that fits ill with a spate of violent episodes, including the bombing of the military church on Sunday.
That bombing showed a degree of sophistication not seen from Boko Haram for months.
Nearly 3,000 people have died violent deaths related to the conflict since the sect launched its uprising in 2009, according to a count by Human Rights Watch.
Boko Haram has replaced militancy in the oil-rich Niger Delta over that time to become the biggest security threat to Africa’s top energy producer.
The letter was handed to the national head of the union of journalists, Aba Kakami, who has often received and distributed statements from the sect, usually claiming attacks against high profile targets or warning of them.
Posted by Unknown at 23:14