Abuja — The Federal Executive Council, FEC, chaired by the Vice President Namadi  Sambo, yesterday, approved contracts  worth N199.19 billion in various sectors of the economy.
Of this amount, road construction and rehabilitation across different geo-political zones of the country took the lion share of N176.13 billion while the construction of terminal building as well as control tower at the Yenagoa airport was approved at the cost of N13.91 billion while the reconstruction of the bombed United Nations Building in Abuja was approved for N5.2 billion. 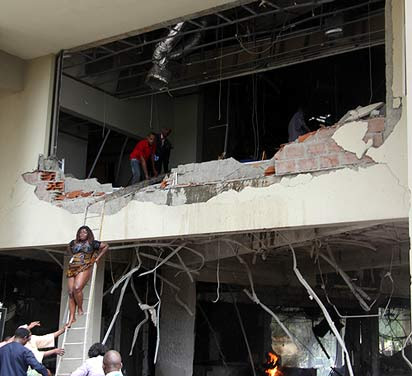 Addressing State House correspondents at the end of council meeting, Minister of Information, Mr Labaran Maku, said the council took cognizance of the onset of the dry season in awarding the contracts for road constructions while the construction of the United Nations Building in Abuja is in fulfillment of government’s earlier promise to foot the bill for the reconstruction of the bombed building.
The Information Minister, who was flanked by the Ministers of Works, Niger Delta Affairs and the Director General of the National Emergency Management Agency, NEMA, also disclosed that council approved for the purchase of brand new Air Ambulance Cessna Ciation Sovereign Jet Aircraft (fully equipped and customized with emergency medical facilities) in the sum of $23,171,058.28, as the foreign currency content and N909,590,181.13 as the local currency content with a delivery period of 32 weeks.

Providing further explanation on the road contracts, Minister of Works, Mike Onolememen, said council approved the dualisation of the Lokoja-Benin road in four slots. They include the Obajana-Okene at a total cost of N11,663,957,682.30 with a completion period of 24 months; Okene-Auchi at a cost of N11,086,276,140.36 with a completion period of 42 months; Auchi-Ehor at a cost of N11,659,588,909.69 and completion period of 40 months and Ehor-Benin at a cost of N11,679,997,440.71 with a completion period of 11 months.
Others include the Nguru-Gashua-Bayamari road, for N6,581,999,666.55, with a completion period of 18 months as well as the augmentation contract of N3,927,544,605.71 on the Ugep-Ikom-Ogoja-Katsina Ala in Cross River/Benue States with a completion period of 30 months which brings the contract sumto N9,136,126,840.71 from an initial figure of N5,208,582,235.00.
Kano-Wudil-Sharin road
Council also approved the contract for the augmentation of theKano-Wudil-Sharin road inKano State for the sum of N18,075,405,695.30, bringing the total contract sum from N37,047,307,376.30 to N55,122,713,072, while  forthe Shuarin-Azare road with extension to Dutse in Jigawa and Bauchi States, the augmentation is N29,474,005,426.71, bringing the total contract from N35,841,452,834.88 to N65,315,458,261.59. The augmentation for the Azare-Pokistum road contract is N16,081,695,740.22. For the Pokistum-Damaturu road, it is N21,653,173,630.22 and a total of N27,796,962,398.76 for the augmentation contract for Damaturu-Maiduguri road.
Council also approved the following contracts including the construction of The Mararaban-Pantisawa-Yorro road (1,187,795,843.85), Suleija-Bakin Iku Abuja road (N1,185,114,615.37), Falali bridge in Kano State (N1,160,359,929.00) and Kundila roundabout also in Kano State (N2,499,924,850.50).
Speaking on the planned reconstruction of the United Nations Building which was damaged last year when a Boko Haram suicide bomber struck it, the Minister of the Federal Capital Territory, Senator Bala Mohammed said, the Federal Government made commitment to get the building ready for occupation soonest.
He said: “It is in view of the above that the Minister of Federal Capital Territory Administration brought a memo to seek council’s approval for the rehabilitation and rebuilding of the United Nations office building in Abuja.
“After deliberations council approved the rehabilitation and rebuilding in Abuja  in the sum of N5,153,043,922.40 with a completion period of 16 months.”
Other approvals granted by council were the framework for the development of the national integrated infrastructure master plan (2014 to 2043); the establishment of the council on Niger Delta to check duplication of projects in the area and  the supply of seven brand new CAT 320 Hydraulic Excavators for NEMA  in the sum of N554,050million with a delivery period of 15weeks.
Also approved for NEMA was brand new Lodico low loader (Flat bed) with tractor head in the sum of N52,080million with a delivery period of 15weeks, N184,785million for NEMA’s existing CISCO VIOP infrastructure with a delivery period of 12weeks and N271,694million for the supply and installation of digital Motorola two-way Radios, Repeaters and base stations at NEMA’S headquarters and it’s zonal offices with a delivery period of 8weeks.
Posted by Unknown at 22:57