Joseph Benjamin in rumour mills saga: “I never said I married my wife out of pity”

Joseph Benjamin recently granted an interview to an online radio presenter who allegedly asked why he married his wife; a woman who is now separated from him and Joseph was quoted as saying he married her after she got pregnant, because he didn’t want to have children out of wedlock.
Minutes after this purported  interview was aired and shared by other eavesdropping online blogs, Joseph was “mis-interpreted” on social networks and entertainment blog  with the headline:  “I married my wife out of pity – Joseph Benjamin”
Now the actor is furious and has stepped out on social networking site Twitter.
Here are his tweets 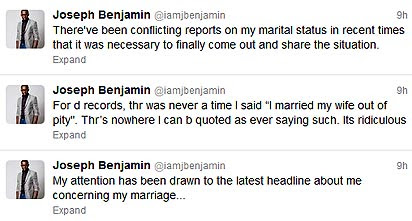 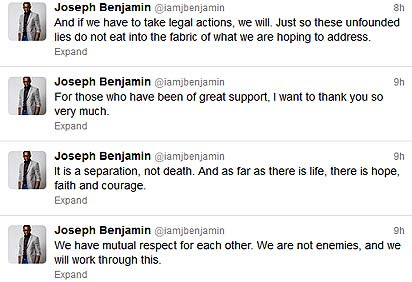 Below is an excerpt of the alleged interview.
What really happened in your marriage?
“I was married for 8 years. It was a rather odd situation at that time. She got pregnant and I didn’t want to have a child out of wedlock and so I married her so we could build a home together, even though we had given birth to the first child.
Things weren’t rosy then, but I believed it was the right thing to do for the sake of the child. I overlooked my own personal desires, I just wanted to do right. Our second child came and I stood by my family like I always have; but no one is perfect, we had our issues – the crisis persisted but we stayed because of the kids. But you never make that kind of decision because if the parents are not happy together then the children suffer.“
Many said Joseph did himself in with the above  response?
Do you agree? Hit me with your comments.
Posted by Unknown at 04:11