LAGOS—Barely two weeks after embarking on an indefinite hunger strike to protest non-payment of his terminal benefit,  Mr. Olubiyi Odunaro, a 53-year-old former employee of Hallmark Bank Plc., yesterday, suspended his hunger strike.
Odunaro, had commenced the indefinite hunger strike on November 12 this year in protest against the non-payment of his terminal benefit as well as that of over 14,000 of his colleagues who were also affected.
Odunaro suspended the hunger strike after several minutes of appeals from the state Attorney-General and Commissioner for Justice, Mr. Ade Ipaye, who was represented by his Senior Special Assistant on Justice and Law Reform, Mr. Lanre Akinsola and the President, Association of ex-staff of Non-Consolidated Banks, Mr. Magnus Maduka at a garden on Mobolaji Bank-Anthony Way, a place he had turned abode since commencement of the strike.
Hallmark Bank was one of the banks that failed to meet the Central Bank of Nigeria’s, CBN, recapitalisation requirement in 2005 and had to fold up, laying off its staff in the process. 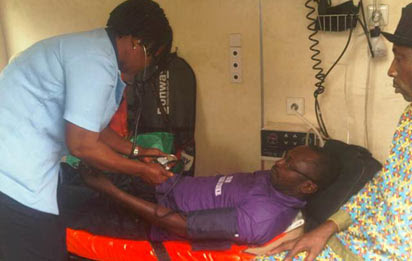 According to Odunaro, “On this strike, I am not acting alone. It is a struggle for me and others who are affected. Since I have received the assurance from my association that I should suspend it; and that the state governor, is now aware of the issue, I will do so today.”
The Ex-Banker who was taken to the General Hospital, with the Lagos State Ambulance Service, LASAMBUS, added, “I am suspending it and I would give the state government the benefit of the doubt. I know the state government has been up and doing on various issues concerning its residents”
Ipaye said: “This is a very pathetic situation and immediately the Governor, Babatunde Fashola, read about it in the media, he mandated the office of the Attorney-General and Commissioner for Justice and the office of the Senior Special Assistance on Justice and Law Reform to set up an inter-ministerial committee that would act on behalf of the state government on the issue.

“The most important thing to the state government is the health of Odunaro. So the first thing we would do is to provide medical service to him. This is because it is an issue concerning a man who has been on hunger strike for the past 15 days. We believe that there is an urgent need for medical attention, and that was why we have brought medical personnel to covey him to the General Hospital.”
The Attorney-General emphasised that it “is when one is alive that he or she would be able to fight for his rights”, stressing that, “We do not want any causality. It is not in the interest of the state government for any of its residence to die.”
He said that the state Government through the Directorate of Citizens Right and other agencies would be providing free legal service for him and others who were affected.
According to him, “The aim of the government is to ensure that justice is achieved and they get their entitlement as fast as possible. We will be working with the lawyers of the affected Ex-Bankers. We are not concerned about who get the result, what we are more concerned about is the result.”
“The government is for the people and that was why we have pleaded with him that he should give the state government the opportunity to wade in. And immediately, we will discuss with all relevant authorities to ensure that Odunaro and others get their entitlement.”
Speaking earlier, Maduka said: “We have persuaded him to press a pause on the hunger strike for now. We have been on the issue for over five years and since the Lagos State Government has decided to wade in, we believe in the government.
“We have not had positive response from any authority since 2005, but with the response from the Lagos State Government, it shows that the state government is proactive. And we want to commend them for their response and Biyi would be suspending his indefinite hunger strike.”
Posted by Unknown at 22:41