BENIN CITY — Soldiers, last night, seized Auchi inEdoState where robbers, Monday night, used dynamites to blast four banks.
At the end of the robbers’ raid, 15 people, including three soldiers, were shot dead while the robbers went away with N3.5 million.
The blood-letting was replayed inBornoStatewhere five policemen were killed and telecommunication masts in the state destroyed. 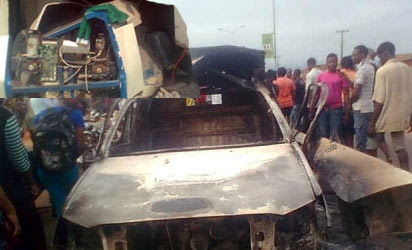 Medical Director ofAuchiCentralHospital, Dr. Jude Omoregie, confirmed that three dead soldiers were brought to the hospital, Monday night. The soldiers, said to have run into the robbers, were killed before they invaded the banks.
The civilians, however, died through stray bullets in different parts of Auchi. Among the four banks attacked, it was learnt that the robbers succeeded in gaining entrance into only one of them because some of the staff of the bank were still on duty. It was said that about N3.5 million was stolen by the robbers.
It was also learnt that the police put up a resistance which infuriated the robbers who went back to bomb a police station.
Robbers bomb police stations
The robbers, numbering about 50, according to eye witnesses, were said to have stormed the area in three Camry cars and a bus and immediately headed to the Auchi Divisional Police Headquarters and the Police Area Command in Auchi, where they blew up the buildings with dynamites and bombs.
Several vehicles including police patrol vans, Armoured Personnel Carriers (APC) within the Area Command and Auchi Division office were set ablaze. The robbers who were alleged to have come from a neighbouring state, Vanguard was told, might have been in the town for one week planning the attack.
Soldiers take over Auchi

Meanwhile, soldiers at the early hours of yesterday, took over the entire Auchi town, making it impossible for vehicles heading towardsAbujaand the South-East to ply the road. It took the intervention of the state government before the ever busy Auchi-Abuja road was opened.
Edo State Deputy Governor, Dr Pius Odubu; the state Director of the State Security Service and the Acting Commissioner of Police in the state, Hurdi Muhammad, visited Auchi yesterday, where the Otaru of Auchi, Alhaji Aliru Momoh, appealed to the Federal Government to beef up security in his domain.
Odubu who described the attack as shocking due to the damages recorded, stressed the need for the Federal Government to equip the police with sophisticated weapons to check the activities of robbers.
Perpetrators must not go unpunished —Otaru of Auchi
According to him, “the police must be well funded because from what we have seen today, these people came with sophisticated weapons and it will be difficult for the police to match them. The state government has done so much to assist security agencies but we believe that the Federal Government has the wherewithal to equip the police force better.
“What happened is unacceptable and we must not allow this carnage to happen again. Those who did this to our people must not go unpunished and I want to appeal to security agencies to help in apprehending these people. The state government will play its part in ensuring that they pay for their sins.”
The Acting Commissioner of Police,  Alhaji Muhammad, who spoke to newsmen, said the police were yet to ascertain the number of deaths, adding that everything was being done to bring the perpetrators to book.
The robbers were said to have commenced their attack in areas where they knew soldiers will provide resistance and in an attempt to ensure that they stopped soldiers from coming out, many civilian casualties were recorded when they riddled many homes with bullets.
Three new generation banks alongPoly Roadand one at Igbe road were attacked. Meanwhile, the Police Area Commander, Mr. David Jimwan, told newsmen that though police buildings were destroyed, the robbers did not succeed in breaking into the police armoury adding that his men succeeded in repelling the firing power of the robbers during the attack.
IG orders CP to fish out culprits
Meanwhile, the Inspector General of Police, Mr Mohammed Abubakar, has ordered investigations into how the robbers moved such heavy and dangerous explosives to perpetrate the act without police patrols intercepting or confronting them.
Consequently, it was gathered that the IGP had given the Edo State Police Commissioner a time frame within which to fish out the culprits.
It was learnt that the IGP took the step because only a fortnight ago, he summoned all Command Police Commissioners from the 36 states toAbujaand warned them to be at alert 24 hours a day as the yuletide period would bring with it, criminal and robbery attacks on banks while kidnapping for ransom might increase.
He consequently advised them to come up with new strategies to nip  plans of the criminals in the bud and ensure adequate patrols to frustrate plots by the criminals to cause mayhem in the society.
On the Auchi incident, Force spokesman, CSP Frank Mba, said following the IGP’s directive, a man hunt had been launched for the criminals who perpetrated the act, noting that with some leads already in police custody, the criminals will be fished out soon.
He said: “The Police is on their trail. The IGP is not taking that attack lightly and he has given the marching orders that the culprits must be fished out. It is our belief that the CP and his men will track them to their hideouts and apprehend them as soon as possible.”
Gunmen kill 5 policemen in Borno, destroy telecom masts
In a related development, gunmen suspected to be terrorists, yesterday laid ambush to Rann, the Headquarters of Kala Balge Local Government Area of Borno State killing five policemen, using Improvised Explosive Devices (IEDs).
The gunmen who invaded the town on motorcycles also succeeded in attacking the official residence of the Caretaker Council Chairman,CentralPrimary School, Government Lodge and destroyed the GSM telecommunication masts belonging to MTN, Glo, and Airtel.
Some of the Policemen killed during that attack, according to investigation, were Corporal Emmanuel Kwaya, Ishaku Sam, Yahaya Mohammed, and two others whose names were not disclosed, while one sustained bullet wounds. The gunmen also carted away three AK 47 rifles from the station.
Last Sunday, some yet-to-be-identified gunmen also invaded a popular beer joint (Artillery) Bayan Railway Quarters, few metres from the demolished enclave of the Boko Haram leader, Ustaz Mohammed Yusuf, where they shot dead two customers, a woman beer seller and another woman who later died as a result of excess bleeding before she was rushed to the hospital.
The Kala Balge incident, our correspondent gathered, took place at about 3 a.m on Tuesday at Rann town of Kala-Balge when most of the residents were still asleep.
A top security officer who does not want his name mentioned said some unidentified gunmen on motorcycles invaded Kala Balge town and attacked  Police Divisional Office of Kala Balge, Boarding Primary School, local government chairman’s official residence, government lodge and three telecommunication masts belonging to MTN, GLO and Airtel.
Posted by Unknown at 23:09