DIDIER DROGBA has opened the door to a shock Premier League return after requesting permission to join another club outside the transfer window.
FIFA said it was considering a request from the Shanghai Shenhua striker on the same day as Drogba’s former side Chelsea sacked manager Roberto Di Matteo.
A FIFA statement read: “We can confirm that the player, Didier Drogba, has submitted a request for authorisation to be registered outside an open registration period for a club on a loan basis.“Our services are currently looking into the matter.” 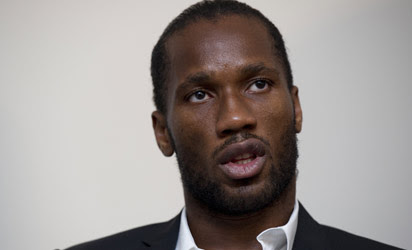 Drogba, who quit Chelsea after scoring the winning penalty in the Champions League final, has been considering training with his former club during the Chinese Super League off-season — something Di Matteo said he would welcome prior to his own departure this morning.
Existing FIFA rules prevent Drogba from representing another club until January 1.
Posted by Unknown at 22:44