ABUJA — President Goodluck Jonathan, yesterday, joined the National Judicial Council, NJC, to urge a Federal High Court sitting in Abuja to dismiss a suit filed against the embattled President of the Court of Appeal, Justice Isa Ayo Salami, by former Governor of Osun State, Prince Olagunsoye Oyinlola.
In separate preliminary objections they entered against the suit yesterday, President Jonathan and the NJC implored the court to strike out the case for want of merit, insisting that Oyinlola was bereft of the requisite locus-standi to institute an action with a view to ensuring that Salami remained on perpetual suspension. 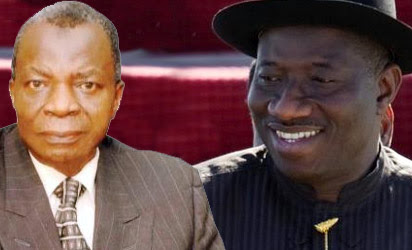 In a joint counter-affidavit of seven paragraphs accompanied with a written address dated November 12, Jonathan and the Attorney General of the Federation, Mohammed  Adoke, branded Oyinlola’s suit as “premature”, saying it constitutes a deliberate abuse of court process.
Likewise, the NJC, in its counter-affidavit of 44 paragraphs, dated June 19 and deposed to by its Deputy Director of Information, Mr Soji Oye, told the court that “the suit and the pervious suits filed on the same subject by the plaintiff herein and his associates, is in extension of the grudge and grievances arising from the nullification of his election by the Governorship Election Appeal Tribunal in November 2010, hence the suits are mischievous and a witch-hunt against a judicial officer carrying out his judicial function.”
Besides, NJC, told the court that the suspension of  Justice Salami was not based on the petitions  written against him by the plaintiff, but on some other controversies altogether involving the retired Chief Justice of Nigeria, CJN, Justice Aloysius Katsina-Alu, adding that, “the recommendation to retire Justice Isa Ayo Salami was never acted upon at all.”
After listening to the parties, Justice Abdul Kafarati adjourned the case till January 24, 2013, for ruling.
It would be recalled that the NJC had on August 18, 2011, ordered Justice Salami to proceed on an indefinite suspension, maintaining that two separate committees it set-up to probe into an uncanny feud that had ensued between the PCA and former CJN, Katsina-Alu, found him guilty of engaging in “judicial misconduct” and “lying on oath.”
Salami was accused of lying in an affidavit he personally deposed before the same high court, when he alleged that Katsina-Alu, had mounted pressure on him to compromise standard in a Governorship Election matter involvingSokotoState.
However, the NJC had since made a U-turn by okaying his return to office, though it is yet to formally order him to resume duties.
Remarkably, despite the fact that the council yesterday told the high court that it has re-instated the embattled PCA, however, it had on November 22, appointed Justice Zainab Bukachua to take over the affairs of the appellate court.
Posted by Unknown at 22:30