Late advertising practitioner, Dr. May Nzeribe, did not die as a direct consequence of the prostate cancer which he had been battling for years; rather, he died from multiple organ failure caused by “thrombosis of the veins” – a medical complication that was triggered by prolonged sitting during the long airplane journey to India, where he went to seek treatment.
Disclosing this development to Vanguard yesterday in reaction to news of Nzeribe’s sudden death, a cancer specialist and National Coordinator, National Cancer Prevention Programme, NCPP, Dr. Kin Egwuonu, said the thrombosis of the veins, often described as
“economy class syndrome” for airplane, car, or train travel, caused blood clots to form in the veins of the deceased.
“He went for cancer treatment but ended up with a bigger problem. When somebody is having cancer, the blood thickens and clots easily and because of this complication from the long flight, he developed multiple organ failure. This is why it is why it is not very okay for people that are not very well to undertake such a
long journey,,” Egwuonu remarked. 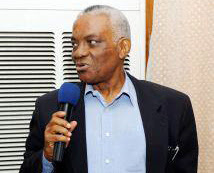 He said the hospital Nzeribe was going to could not even treat him anymore because of the complications from the long flight. He was taken to the Intensive Care Unit and the Indian doctors wanted him to be brought back to Nigeria, but he died there.
The point really is that if we had a place to treat cancer in Nigeria, he would not have gone to India and would be alive today.
Eulogising the late Nzeribe, Egwuonu, also an advocate cancer care in Nigeria, described him as one of the champions of cancer care and treatment in Nigeria remarked that he had been in India for about three weeks before his death.
“He had lost his wife to breast cancer much earlier, and then he developed cancer of the prostate and was not able to get adequate care in Nigeria because we do not have comprehensive cancer care system. He was not happy with the quality of care and equipment in Nigeria. We were working together for better care for cancer in Nigeria and he would have not traveled out if he could have helped it.”
Nzeribe’s last public outing was the launch of his book entitled: Ethics in Advertising and Public Relations. Lagos State Governor Babatunde Fashola, who was Chairman of the event had donated N1.0million to the proceeds which have been dedicated towards the Port Harcourt Cancer Centre.
“He was concerned about ensuring that people do not suffer traveling abroad for treatment like he did. We want a cancer care centre in Nigeria so that people can obtain treatment here and not be traveling when they are sick. Prostate is a chronic illness but would not kill ordinarily if it is well managed,” he said.
Posted by Unknown at 01:56