Many killed as suicide bombers hit military church in Jaji

Soni Daniel, Regional Editor, North, Kingsley Omonobi, Emman Ovuakporie &  Luka Binniyat
KADUNA – Over 11 persons were feared dead, yesterday and several others seriously injured when a suicide bomber rammed into theSaint Andrews Protestant Church, inside the Army Cantonment, Jaji, inKaduna.
A military spokesman told the British Broadcasting Corporation, BBC that two vehicles were driven into the barracks in Jaji in what he described as “surprising and an embarrassment”.
The unprovoked attack, according to witnesses, took place between 11:30am and midday when the first set of worshippers were about to depart after the first service.
The attacker, it was learnt, had aimed at killing most of the worshippers as they were coming out of the church. 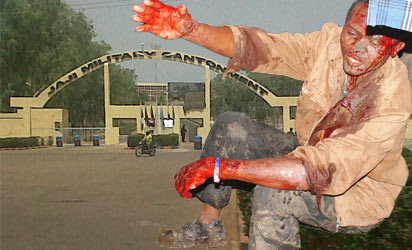 Scores of lucky worshippers and passersby were also severely wounded by the force of the blast, which shocked many residents of the cantonment who are mostly middle cadre military officers undergoing their compulsory command and staff training programmes.
It was gathered that most of the critically wounded were rushed to the Ahmadu Bello University Teaching Hospital, while others were taken to a nearby hospital with life support facilities. The bodies of the victims were also taken to nearby mortuaries in the city.

A military source confirmed the blast and the death of many persons but said it was too early to give the specific casualty figure.
Sources told Vanguard that the vehicles were driven into the Jaji cantonment through the bush, thereby escaping all the military checkpoints mounted at the entry and exit points into the cantonment.
Military sources disclosed that the suicide bombers, who died in the blast, came through the Maraban-Jos axis, and thereby escaped being detected at the Abuja-Minna-Kaduna axis.
The source said: “It is true that a suicide bomber attempted to enter the St. Andrews Protestant Church inside the Cantonment but he was stopped from gaining access to the main building. But he detonated his bomb and killed himself and some other persons.
“The main building of the church is not affected and a few people have died but we cannot give the exact number of persons who have been killed”.
But the  Director Army Public Relations, Brig Gen Bola Koleoso who had earlier denied knowing the casualty figure later sent a text message to say that 11 were killed, and 30 injured.
Brig Gen Koleoso who confirmed the incident in a  text message to Vanguard in Kaduna said: “There were twin suicide bombings today (Sunday)  at the St. Andrew Military Protestant Church, Jaji Military Cantonment at 1205hrs and 1215hrs.
“A bus first ran into the church and exploded about five minutes after service had commenced  while a Toyota Camry parked outside the church detonated ten minutes later.
Figures of casualties are not yet clear but the injured are receiving treatment at military hospitals both in Jaji and Kaduna. Investigation into the bombings has commenced and the area already cordoned off.”
However after informing him that the casualty figure was put at 50, he responded saying:  “11 dead, 30 injured. Do not be carried away by emotions please. The information you need have been given”.
Newsmen, NEMA, SEMA denied entry
Officials of the National Emergency Management Agency (NEMA), Kaduna State Emergency Management Agency (SEMA) and the Red Cross told Vanguard on phone that the Army refused them entry to offer assistance to the victims. Newsmen were also barred from getting to the bombed church.
But several sources at the scene of incident said that not less than 50 people were killed.
“I personally counted 50 dead bodies, about 20 were burnt beyond recognition. Some of the injured have severe cases”, said a source, who lives near the church.
“I saw a truck load of bodies arrive 44 Army Referral HospitalKaduna. I can’t be sure if they were dead or living. Soldiers would not allow us take pictures or even go inside”, said a Photo Journalist
Another source said: “The first car was said to have exploded without any casualty and many people had gathered to see the wreckage of the car when the second suicide bomber arrived as he detonated the bomb. Many people were killed, I am not in a position to say how many people are dead, but they are many, I saw many dead bodies. I think the people that died may be in the region of 40 or 50. I cannot say precisely.
“This is sheer wickedness of the highest order. How can any human being plan this kind of wickedness? We are now feeling very insecure in the barracks. Our security system here has been very porous. When people come and they stopped them from entering, they will call their relations and the people they know and they will be allowed inside. This is a very serious embarrassment to us”  another source said.
Apparently angered by the temerity of the bomber, the military authorities there are said to have immediately sealed off the area and begun a serious security crackdown within the vicinity of the cantonment with a view to apprehending the masterminds of the dastardly act.
“For now, we are studying the situation very seriously and we hope to make progress in our search for the culprits,” a senior security officer, who is familiar with theKadunaincident, stated.
It will be recalled that attacks by suicide bombers on places of worship in the northern parts of the country have become a recurring decimal, sending shock waves to Christians in those places.
Only on October 28, 2012, suicide bombers drove into a Catholic church inKadunaand murdered seven worshippers in the thick of their morning mass.
Last month, many Christians were killed in a church in Bauchi and 50 others were injured in a suicide bomb attack which took place during the early morning mass at the St. Johns Catholic Cathedral Church Bauchi.
Mark condemns act
Senate President David Mark has condemned the twin bomb blasts at St. Andrew Military Protestant Church, Jaji, Kaduna State and urged security agencies to rise up to the challenge
In a text message by his Chief Press Secretary, Paul Mumeh, Senator Mark also pleaded with the perpetrators of the evil acts to give peace a chance.
According to Senator Mark, whatNigeriawas at the moment going through should be seen as a challenge to all Nigerians irrespective of tribe, religion, ethnic group or political affiliation.
The text read: “Again, Senate President, David Mark has asked any aggrieved group or persons to accept dialogue instead of resorting to violence. He pleads with perpetrators to give peace a chance.
“We have more to gain by being our brothers’ keeper. Security operatives should step up to the challenge”.
Tambuwal condemns bomb blast
Speaker of the House of Representatives, Hon. Aminu Waziri Tambuwal, who condemned the bomb blast urged the security agencies not to despair over the attack on their facilities.
In a statement issued by his Special Adviser on Media and Public Affairs, Malam Imam Imam, Tambuwal said no religion condones attack on innocent worshippers, and urged all those behind the bombings to stop forthwith.
While grieving with the families of those who lost loved ones in the unfortunate attack in Jaji, Tambuwal prayed for the quick recovery of those injured in the bombings.
Posted by Unknown at 22:10