State of the Nation: Senate set to battle Jonathan 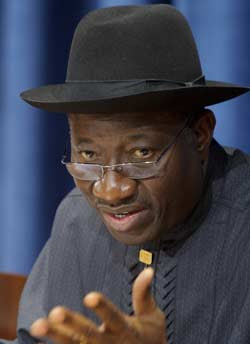 ABUJA — THE Senate, yesterday, drew the battle line when it threatened to over rule the President should he not assent to a bill asking him to make the State of the Nation Address annually.
The bill requires the President to address the National Assembly on the affairs of the nation annually.
In an apparent reaction to President Goodluck Jonathan’s rebuff  of an earlier version of the bill forwarded to him two years ago, the Senate vowed yesterday to override him should he again veto the bill.
The bill on the State of the Nation Address which was forwarded from the House of Representatives was presented to the Senate by the Senate Leader, Senator Victor Ndoma-Egba.

In his lead debate, Senator Ndoma-Egba, noted that the bill would neither foreclose presentation of annual budgets nor duplicate its functions, adding,  that ‘’the idea of the Bill is to take stock of the nation, its condition, the governments and its performance; the people and their well being”.
Contributing to the debate on the bill, Senators said the bill would give legal muscle to the crave by lawmakers for the president to brief the legislative arm on the affairs of government, even as they submitted that specific details on what steps the National Assembly would take should be included in the bill.
In his remarks, Senator Uche Chukwumerije, PDP, Abia North, however, cautioned that the address should have thematic guidelines which should cover the economy and social stability.
For Senator Magnus Abe, PDP, Rivers South East, ‘’we should not look at this bill for just for today. I don’t see any challenges in the implementation of this, it would give Nigerians an opportunity to hear directly from the president.” He however said that he has an issue with the article that says the National Assembly may summon the president using two thirds if he doesn’t address the nation.
Opposition derserves right to react
On his part, Senator Olusola Adeyeye, ACN, Osun Central, advocated that in the aftermath of the president’s speech, the opposition should be given an opportunity to react to some of the issues that would be raised by the president.”

The Bill, which scaled the second reading was referred to the Senate Committee on Federal Character and Intergovernmental Affairs to look at and report to the entire house in the next two weeks.
Speaking after discussions on the Bill by senators, Deputy Senate President Ike Ekweremadu, who presided over yesterday’s plenary, said the National Assembly would heed the advice of the President’s Special Adviser on Political Matters, Alhaji Ahmed Gulak who had earlier dared the National Assembly to invoke its powers if the President refuses to assent to the Bill.
Ekweremadu said:  “We decided that there is need for us to make it compulsory for the President to appear before the National Assembly and present a state of the Nation Address. When that did not happen, we again introduced it in 2008.
“To make sure that the Bill sails through, I discussed with President Umaru Yar’Adua the difference between the Bill and what the Constitution says and Yar’Adua was excited and looked forward to being the first President to present the State ofNation Address.
“Unfortunately by the time the Bill was passed he had died. It was then President Goodluck Jonathan who had the opportunity to preside over the issue of signing the Bill. He did not sign the Bill. It happened during the closing days of the last Senate. We didn’t have the opportunity of bringing the Bill back to over ride the veto of Mr. President.
“We would have over-ridden the veto if we had enough time to do so. But technically, at the end of the session, the Bill lapsed and we needed to start afresh. It was not as if we did not know what to do with the Bill.
“We believe that this time the president will sign it but if it is not signed, you know the Presidential Adviser on Political Affairs, Ahmed Gulak, advised us that if the President refuses to sign our Bill, we know what to do. So that might be the first time we heed the advice of the Political Adviser to the President. This Bill will be considered by the appropriate committee and returned in good time so that the country will begin to benefit from the very important provisions of the Bill in line with the practice in most other countries including our own sub-region. Even inGhanathere is a provision for State of the Nation Address.”
Posted by Unknown at 22:38