KADUNA –The death toll in last Sunday’s bomb blast at St Andrew’s Anglican Church at the Armed Forces Command and Staff College, AFCSC, Jaji, Kaduna State has risen to 15. Jaji is about 40 kilometres north of Kaduna city.
The Commandant of the College, Air Vice Marshal Ibrahim Abdullahi Kure, gave this hint while conducting the state Governor,  Patrick Yakowa round the church amid tight security. 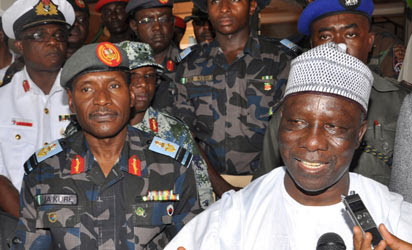 The Director, Nigeria Air Force, NAF, in the college, Air Commodore Alechenu Ekagbo, and some children were alleged to be among those who were seriously injured.
Kaduna State Governor, Patrick Yakowa who visited the scene of the bombing at Jaji, yesterday, described the inci dent which occurred inside a military establishment as ‘’a devastating event that calls for sober reflection.”
His words: “The bombing of a church within a premier institution like AFCSC is a wake-up call to all security agencies within the country to continue to sit up so as to fashion out a solution on how to curb the incidents of bombing or terrorism. The biggest project now inNigeriashould be the search for peace so that the enormous potentials ofNigeriacan be fully harnessed. Religious bigotry or terrorism will only destroyNigeriainstead of building it.”

The Governor also said that the state government would pay the medical bills of the victims.
Kurehad told Yakowa that some of those who died included children, without giving further breakdown of those who were either dead or injured.
At least 50 people were said to have been injured during the bomb attack, even as unofficial sources claimed that no fewer than 30 died.
This was even as the Military, placed security cordon of about one kilometre radius from the church and all the hospitals where the victims were rushed to for treatment in the area with clear instructions barring newsmen from coming near such areas.
Journalists, others barred
Journalists who accompanied Governor Yakowa and other non-military officers were also barred from both the scene of the bombing and the hospitals.
Governor Yakowa, was allowed into the Jaji barracks with limited number of his cabinet members but journalists were bared from following him into the devastated church building, as they were diverted into a conference hall about a kilometre from the area and warned not to aim their cameras at any object in the barracks.
Officials of both the National Emergency Management Agency, NEMA, and the Kaduna State Emergency Management Agency, SEMA, and the Red Cross who spoke to Vanguard expressed anger over the refusal of the Military to allow them into the barracks to ascertain the number of casualties and the needed relief materials for victims and their relations.
Air Commodore Ekagbo’s family
A source in Ekagbo’s family who described him as an affable gentleman that loves to play golf, said the military officer was in his house about 10 meters away from the church, when the second explosion occurred.
“He was severely injured, even as part of his house came down on him. He also had some visitors, who also sustained sever injuries. The entire brigadiers’ quarters to the end of diamond Bank, was badly damaged.
“I counted about 20 burnt cars and even more motor-cycles. When the Air Commodore was taken away, we all thought he was dead. And we the Idoma Community here (Jaji) had started mourning him deeply, until we were assured this (yesterday) afternoon, that he had very bad injuries but is alive. The problem is that even we his family members are not allowed to see him.”
The Director of Army Public Relations, Brig Gen Bola Koleoso, in a text message to Vanguard on the issue also simply stated:  “It is either you believe me or you believe lies. As of now 5:45pm, (yesterday) Monday, November 26, 2012, there is no information like you are saying. Investigation panel has been set up and only the panel can specifically say what is authentic concerning the unfortunate incident beyond my press releases. Thank you.”
Governor Yakowa who was accompanied to Jaji by the Secretary to the State Government, Alhaji Ismaila Yakawada, the Commissioner for Information, Saidu Adamu, his counterpart in the Ministry of Water Resources, Mr Sunday Marshall Katung spoke tersely to reporters waiting at the hall where they were told to wait.
Yakowa said, “It is a devastating event that calls for sober reflection…Kaduna state will work with all security agencies in the state to continue to provide security. All medical bills of those affected will be settled by the state. I prayed for healing of those still in the hospital and asked God to give the families of the dead the fortitude to bear the loss.”
Meanwhile, the Arewa Consultative Forum’s, ACF, National Publicity Secretary, Mr.
Anthony Sani who spoke in an interview in Kaduna yesterday, on the level of insurgency which has heightened since the Federal Government placed ransom on the leaders of Boko Haram, said that there was need for government and the insurgents to end hostility.
Sani said, “I do not even know and do not understand how they broke into the whole arena of the military command. It shows clearly that our military are not using their intelligence. How could they have broken into the fortress of the military Command. Could it be that our intelligence community are not living up to expectation; though some people have been saying that our intelligence is not up to standard.

It is a failure of our military intelligence. I want to believe that the Federal Government took its recent decision to place ransom on the leaders of the insurgents, is to make Boko Haram to be very serious about the offer and to embrace dialogue. But, when people say the offer of ransom and dialogue are mutually exclusive, I refuse to agree.

I want to believe that the Federal Government did that so that they can make Boko Haram to be serious about their offer.  I do not want to believe there is a confusion. But I would suggest that while we as a Forum, we want dialogue, but, at least we should be able to know the sources of who is making the offer”.
Posted by Unknown at 22:39