2015: Jonathan is wasting his time – Shuluwa 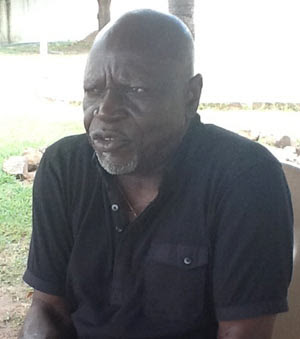 Elder statesman and one of the founding fathers of the ruling Peoples Democratic Party, PDP, Chief Abu King Shuluwa in this interview spoke on nagging national issues and gave reasons why the government should negotiate with the Islamic Boko Haram group, why Nigeria could break up after 2014 even as he expressed opposition to any bid by President Jonathan to sustain his presidency beyond 2015. Excerpts:
ON Boko Haram’s choice of Major General Muhammadu Buhari (rtd) to lead the dialogue.
Anybody’s name could have been mentioned. The people (Boko Haram) are the ones who said this is the person we want.
And if they said this is the man we want, perhaps, they discovered that of all the people in Nigeria, he is in-between; he is not for them, he is not for the Federal Government.
So, they are probably looking for a neutral person. Another issue is that a lot of people believe that Boko Haram is the making of the PDP which I belong.
There is no way Obasanjo and Modu Sheriff will not have a hand in what is called Boko Haram insurgency today.
It was an organization that was formed to make sure that Ali Modu Sheriff became a governor against the PDP candidate. Eventually, either they may have been hijacked by another organization or they metamorphosed into what is today called Boko Haram.
What do you think the sectarian agitations by such groups like Bakassi, MASSOB portend for the unity of the country?
I am not a prophet but I have talked about the amalgamation which brought this country to being in 1914. And I said that by 2014, if we are not careful,Nigeria will not be the same.
And from the statements coming from the South-South particularly the Niger-Delta region, one can deduce that this country will no longer be the same again as from 2014. For instance, there was a time that Chief Edwin Clark said Jonathan will be President but not the President of Nigeria.

Sadly, people don’t understand some of these statements. There is a clause in the amalgamation of 1914 which says that after 100 years of existence, any part may decide to go.  Therefore, because of the oil that we have in the South-South, the Niger-Delta people believe that they can go on their own.
And all the arrangements they are making is to make sure that by 2014 they will write a memorandum to the United Nations saying they want to become a nation separate from what is today known as Nigeria and they will draw a map, they will compose their national anthem.
It’s just like what happened in Sudan. And that is the reason they insisted on Jonathan being the President this time because if you allow a northerner to be president, it will not be as easy to break away as when Jonathan is President.
But do you think the North can sustain itself if the South pulls out?
We can. Before we discovered oil what were we doing? We will now go back to agriculture. We will lock up ourselves. We can discover oil in the North also.
If you can discover oil in Niger Republic or even Chad, why can’t we discover oil in the North? Mind you, there is now oil in Kogi State which Anambra and Enugu are now fighting to take. Who says we cannot discover oil on River Benue?
It is a matter of exploring and discovering. If you can discover oil in the far desert why can’t we discover oil here? Even if we don’t discover oil, tell me, there are a lot of countries that don’t have oil and yet they exist. Who ever knew that there would be oil in Ghana?
Oil from Niger Republic
Niger Republic can sell oil to us while we sell food to them. Today, if you go to Katsina State, the fuel they are using comes from Niger. They don’t care about what is happening here any longer because Niger must sell its fuel.
And if that happens, we will now either say Niger-Delta should go which also gives Biafra the opportunity to take over. Remember it was the North that prevented Biafra from existing then.
The Niger-Delta alone cannot stand the force of Biafra. They can’t but if they think they can, that country will be destroyed because I know that America will back them up and there will be fighting for a long time and we will be watching them fighting.
So, it then means that in the South, you are going to have more than five nations. Everybody that has oil will not want the other person to be part of it.
So, how will the Middle-Belt in the North fare given that the Core North almost always takes everything?
I believe in one thing, that whoever is competent should be allowed to run. Unfortunately when a minority is occupying a seat, he looks for the majority for support. He doesn’t look for the minority and that is what President Jonathan is doing now.
When Jonathan comes to the North, he doesn’t give a better job to the minorities of the North. You people were just supporting him for nothing. I did not support Jonathan and I will never support him.
But he is planning to go for second term….
He is wasting his time. By the time Jonathan goes for second term, some of us will become like old trailers without brakes and we will be descending a slope.
So, anything on the road we will be crushed. 2015 is the last time I will be in active politics. So, does it mean that I will lose out again? No way. I am not prepared to lose out.
Posted by Unknown at 22:37