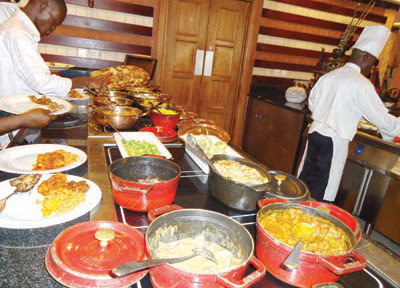 ABUJA —THE Senate was, yesterday, told that the N1, 305, 292, 050 set aside in the 2013 budget for refreshment and meals and other miscellaneous expenses in the State House will not be enough.
This is just as a breakdown of the Miscellaneous sub-head in Aso Rock’s budget shows that N203,752,432 was allocated for refreshment and meals; N107,412,768 would be spent on honorarium and sitting allowance while N37, 277,825 will be for publicity and advertisement.
These were disclosed, yesterday, when the State House Permanent Secretary, Emmanuel Ogbile appeared before the Senator Dahiru Kuta-led Committee on Federal Character and Inter-Governmental Affairs to defend the N14,715,566,104 budget for next year.
Ogbile also told the senators some other expenses that were being taken care of in the refreshment and meals vote, which he said include National Economic Council (NEC), Council of State, conferences in the Banquet Hall, Presidential retreats, National Merit Award, Children’s Day as well as hosting of dignitaries. Chairman of the Committee, Senator Dahiru Awaisu Kuta, however, countered the Permanent Secretary on the provision for the Merit Award which he said has its own budget.

The Permanent Secretary also gave a further breakdown of the 2013 State House budget as thus, Medical expenses (N50,308,546); Postage and courier services (N10,035,583); Welfare packages (N195,066,223); Subscription to professional bodies (N4,589,793); and Sporting activities (N32,910,730).
According to him, Overtime will gulp, N250,455,589; Feeding of animals including animal supplements for the veterinary clinic (N30,584,144); Summit/ Extra ordinary sessions including the UN, African Union, ECOWAS, etc (N228,112,862); and NYSC, IT, LOCUM, Housemanship and contract staff allowance (N144,788,555).
According to Ogbile: “I have taken pains to explain that this money is not just to fund the residence of the President and that of the Vice President. The experience I have had is that this fund is grossly insufficient. It is not even enough.”
The Permanent Secretary noted that “it is also from the budget of N1.305 billion that we take care of the Federal Executive Council (FEC) which holds every Wednesday.”
Posted by Unknown at 22:40