THE former Chairman of Ikeja Local Government, Lagos State, and ex Special Adviser to Governor Babatunde Fashola on Health during his first term in office, Oluwatoyin Hamzat, has been assassinated by unknown gunmen.

THE former Chairman of Ikeja Local Government, Lagos State, and ex Special Adviser to Governor Babatunde Fashola on Health during his first term in office, Oluwatoyin Hamzat, has been assassinated by unknown gunmen.
He was reportedly shot in the head at Sabo, Sagamu, Ogun State, at about 9p.m. on Sunday.
He was said to have left Sagamu Town Club where he went for a meeting and was heading for his country home when he met his fate. 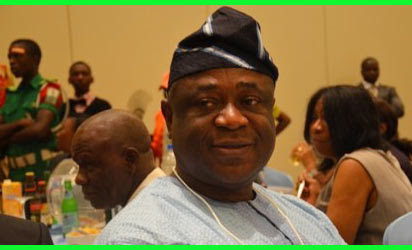 The killers, it was learnt, blocked his car wiith an Ogun painted taxi. They emerged and shot him at point blank. They reportedly left the scene without taking anything from his car.
His nephew who was in the car with him when the incident occurred, told Vangaurd that his remains had been taken to Ijebu Aiyepe, Odogbolu Local Government, for burial this afternoon, according to Islamic rites.
He said they were on their way to his country home, where the former chairman did his housewarming on October 1 when they were ambushed by the gunmen.
The colourful politician was spotted at Governor Babatunde Raji Fashola’s 2000 days in office celebration, held at LTV 8, Ikeja and Chief Kamoru Danjuma’s colourful party held in Abeokuta, on Sunday.
He was said to be preparing for Asiwaju Bola Tinubu’s chieftaincy ceremony in Abeokuta yesterday before the incident occurred.

Also confirming Hamzat’s death, Keye Abiodun Banjo, Secretary of Bobakeye age group of Ijebu-land of which the deceased was a member, told Vanguard that he received a call last night informing him that Toyin was dead.
“I received a call last night from someone that Toyin was killed in Shagamu around 9.30 p.m. He was a member of Bobakeye of which I am the scribe of the group. He will be buried today in Aiyepe in Odogbolu Local Government Area of Ogun State.
“He was not at the meeting we held last week but he sent his apologies. We will all miss him. May his soul rest in peace,” he said.
Fashola, Ashafa, lawmakers, express shock
Governor Babatunde Fashola and Senator Gbenga Ashafa, representing Lagos East Senatorial District and members of the state House of Assembly, in a prompt reaction, expressed sadness over the death, describing it as “shocking.”
In a condolence message to the family of the deceased, through his Special Adviser on Media, Mr. Hakeem Bello, the governor described it as most unfortunate, shocking and heart rending, the fatal attack on his former Special Adviser.
According to the governor, it was a supreme irony of life that such a man of peace who gave so much in the service of his nation and community could come to such a violent end.
While condoling with his Ogun state counterpart, the government and people of Ogun State as well as the immediate family of the deceased, Fashola, said Hamzat’s death was a personal loss to him, Lagos State and the entire South West family of the Action Congress of Nigeria, ACN. The governor therefore, prayed the Almighty Allah to grant the soul of the departed Al-Janah Firdaus and imbue the widow and family members with the fortitude to bear the irreparable loss.
Unassuming public officer
Also, in his short message, Ashafa expressed shock at the sudden demise of Hamzat, he described as a gentle, unassuming public officer with high integrity.
Ashafa condemned the dastardly act and called on the authority of the Nigerian Police to as a matter of urgency unravel the people behind the act and bring them to book, to serve as deterrent to others.
“This killing must not go down as another mystery death in this country. Enough is enough. The killers must be brought to book.” Ashafa stated.
Also, members of the state House of Assembly, during it plenary session yesterday, commiserated with the family of the deceased. The Chief Whip of the House, Dr. Abdulrrazaq Balogun who brought the issue up said his death was so sudden.
He recounted their last meeting after Toyin Hamzat was made the Otunba in Ijebu-Ode.
Balogun said “Once a Special Adviser for four years in the Ministry of Health, he had a cordial relationship with his Commissioner and performed his role deligently as expected of him.
Similarly, Omowunmi Olatunji-Edet, informed the sitting that she had a good working relationship with him as the Chairman of the Sport Council. She described him as a party faithful that is committed to the progress of the ACN government.
Ogun Police give account of the killing
REACTING to the killing of Hamzat, police spokesman in Ogun State, ASP Muyiwa Adejobi, described the killing as a case of assassination as nothing was taken away from the car.
He said: “Truly, the man was killed yesterday. It was a case of assassination. Noting was taken away from him. He was shot in front of his woman friend’s house. Five suspects have been arrested and they are in our custody at the state police headquarters, Eleweran, Abeokuta.”
The five suspects are the deceased’s woman friend, her husband and three taxi drivers.
It was gathered that the woman’s husband and the late Toyin Hamzat once met at the woman’s residence at Sagamu where they engaged in a brawl.
Vanguard also gathered that one the taxis impounded has been identified as the one used during the operation. A police source also confirmed the arrest of the man who allegedly fired the shot that killed Hamzat.
Hamzat’s profile
Hamzat, a Pharmacist, was a pioneer member of the Alliance for Democracy, AD, Action Congress, AC and Action Congress of Nigeria, ACN.
He was the Chairman of Ikeja Local Government between 1999 and 2002 and later became a Special Adviser on Local Government Affairs to Asiwaju Bola Ahmed Tinubu. He also served as  Special Adviser to Governor Babatunde Fashola on Health during his first term in office
He was born 1 October, 1960. He attended Adeola Odutola College Ijebu Ode for his ‘A’ Level and the University of Lagos, Idi Araba, for his Pharmacy degree.
Late Oluwatoyin Hamzat, was a member of the Pharmaceutical Society of Nigeria, (PSN), Honorary fellow, West Africa Postgraduate College of Pharmacist,  Member, Ikoyi Club 1938, Member, Yoruba tennis Club.
Posted by Unknown at 23:14