Former Minister of Justice and Attorney General of the Federation, Prince Bolasodun Ajibola, SAN, has described President Goodluck Jonathan’s recent statement to the effect that the former governor of Bayelsa State, Chief Diepreye Alamieyeseigha, was his political benefactor as an insult to Nigerians.
Ajibola, a former judge of the International Court of Justice, said Jonathan was wrong to have described ‘’an ex-convict’’ as his benefactor and asked him to ‘’say it again.’’
President Jonathan had, while addressing stakeholders of the ruling People’s Democratic Party, PDP, in his home state of Bayelsa, on December 10, reportedly acknowledged that Alamieyeseigha  was his political mentor, and called on the political class in the state to put aside their grievances in the collective interest of the people, but Ajibola described the remarks as demeaning on Nigerians.
The former Minister spoke in an interview with Vanguard at the engagement ceremony of son of Oba Olusanya Adegboyega Dosunmu, the Olowu of Owu Kingdom, Ogun State, Thursday.  Owu is Obasanjo’s home town.
Alamieyeseigha was detained in London on charges of money laundering in September 2005. He reportedly escaped from the UK in December of same year.
He was later charged to court in Nigeria, where he pleaded guilty to the six- count charge of money laundering offences in July, 2007, and was sentenced to two years in prison on each count.
On the face-off between President Jonathan and former President Olusegun Obasanjo, following Obasanjo’s remarks that Jonathan was a weak leader, Prince Ajibola said Obasanjo was right to have spoken his mind. 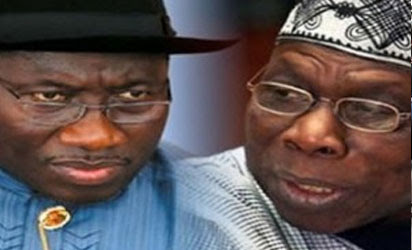 His words: “One other thing that bothers me lately is a statement credited to President Goodluck Jonathan where he said that Alamieyeseigha was his benefactor.  I think he was misquoted and he should say it again!
“Jonathan should speak on this statement because it is not safe for us as a nation and as a people that an ex-convict is the benefactor of our President.  He should speak up now because any further delay may be dangerous for our national image.’’
On the disagreement between former President Obasanjo and President Goodluck  Jonathan, Ajibola said Jonathan’s misunderstanding of the former leader’s sincere comment on the state of the nation was unfortunate.
“In a matter of time, Obasanjo and Jonathan will resolve the issue between the two of them.  To me, it is not an issue that should generate the noise that has attended it because it was a sincere comment by a concerned Nigerian leader about the state of the nation.  So the controversy that followed that sincere comment and observation is unnecessary,” he said.