Fair skinned Nollywood actress Nkiru Sylvanus and former Mr Nigeria Kenneth Okolie who were kidnapped, Monday, in Owerri have been released, Thursday night, by their captors.
Nkiru and Kenneth were both kidnapped at 2.30pm close to the famous Concord Hotel, Owerri. The kidnappers had then contacted family and some friends of Nkiru to demand N100m as ransom. But barely hours after an open letter was written to the IG of Police on the matter by concerned friends of the kidnap victims, their release was eventually secured. 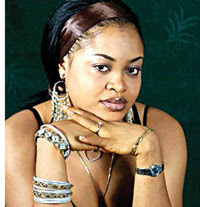 As at the time of filling this report, it is uncertain if any ransom was paid.
Posted by AB4CHRIST at 04:17