How to overcome our challenges – OBJ, Anyaoku

ABEOKUTA— Elder Statesmen- former President Olusegun Obasanjo and Chief Emeka Anyaoku, former Secretary General of the Commonwealth of Nations, yesterday, reviewed the state of the nation in 2012 and proffered suggestions on how to overcome the present challenges.
In separate statements, both leaders acknowledged the efforts the Goodluck Jonathan administration is making to tackle the challenges and concluded that Nigeria would rank among the greatest countries of the world in the nearest future.
Addressing newsmen in Abeokuta, the Ogun State capital, Obasanjo lamented that despite the abundant resources the country was endowed with, the country could not manage it well. 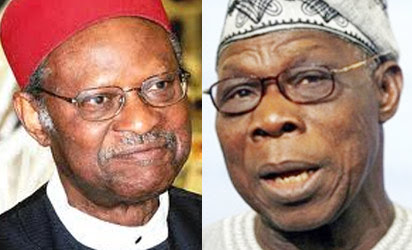 Obasanjo who was thanking God for His mercies over the country, said despite the bombings and other dangerous activities, he believed that the country would achieve peace.
“On Boko Haram, I know we will get there very soon and Nigeria will enjoy peace and tranquility,”Obasanjo said.
While speaking on alleged mismanagement of resources by the leaders, Obasanjo said “God has  been extra generous to Nigeria; many nations of the world are not as richly endowed as Nigeria.”
He, however, urged Nigerian leaders to harness the country’s endowments for the transformation of the nation.
“I believe good people will be able to manage it, maybe later. But the earlier we are there, the better and I am sure we will be there. We will be there because God has been kind to us, we only need to be kind to ourselves. God will help us.”
In his end of year comment, Chief Anyaoku said: “2012 is ending with a number of our national challenges remaining acute among which are insecurity, corruption, and dilapidated state of our roads.
“But the year has also seen some improvements in such areas as agriculture, foreign direct investment, railways, power and macroeconomic management. I believe that if the hopes kindled by President Jonathan’s administration are actualised, and the country’s present inefficient governance architecture is far-sightedly reformed in the ongoing constitutional review, 2013 and the year after will be the years of a decisive march towards the Nigeria of our dreams.”