BY EMMA AMAIZE & AUSTIN OGWUDA
ASABA —  A member of the 10-man kidnap gang who earlier this month abducted the 82-year-old Prof, Kamene Okonjo, mother of the Minister of Finance, Dr. Ngozi Okonjo-Iweala, yesterday, confessed his involvement in the abduction and narrated how he fed the retired professor of sociology with groundnut, water and bread in the kidnappers’ den.
The suspected kidnapper, Andrew Dime, aka Olokpa, 32, who hails from Enikorogha in Edo State, however, told Vanguard that he was only hired by the second-in-command of the gang to supply food to Prof. Okonjo on two occasions at a fee of N100,000.
Delta State Commissioner of Police, Mr. Ikechukwu Aduba, on the other hand, told Vanguard that Prof. Okonjo was kept in the custody of the suspect, who was in-charge of her feeding.
The second-in-command of the gang allegedly swindled him when he bolted with his N1 million share of the ransom collected for the release of Prof. Okonjo.
Apparently, to settle scores, the police said the suspect formed a new kidnap gang, which abducted an octogenarian at Aboh in Ndokwa area of the state.  But having obtained a database on the group after its leader, Nwaeze Nwosa, aka Bolaji was shot dead in Asaba, the police were able to track down the suspect.
Aduba told Vanguard that the police set a trap for him when it got information that he was in dire need of money for the yuletide by convincing him to sell one of the guns used for the abduction of Prof. Okonjo, which was in his custody. He fell for the trap and negotiated a price of N300,000 for a pump-action gun with a police officer, who posed as a buyer. He was, thereafter, arrested at Koka junction, Asaba, when he came to collect the cash.
Dark-complexioned Andrew, who spoke to Vanguard in an interview, debunked the claim that he formed a new kidnap gang and that he was the one that negotiated the sale of pump-action gun, which was used to ensnare him.
A police source said he was being economical with the truth, adding: “Most of these people (referring to criminals) will never tell you the truth when you arrest them until you get other members of the gang to confront them.” 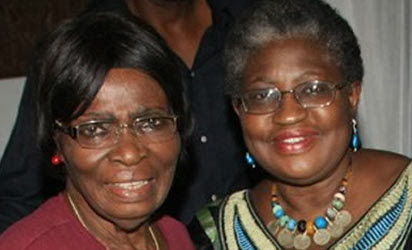 Below are the excerpts of the interview with the suspect
What is your name?Andrew Idime.
How old are you?32.
Where are you from?I am from Enikorogha, Ovia South-West Local Government Area of  Edo State.
Where do you live?I live at Army Barracks, Onitsha.
Do you know why you are here in police cell?For now, I know why I am arrested. Some friends of mine, they indulged themselves in kidnapping act. One of them is Chiboy and another is Biggy.  The person I know very well is Chiboy. It was through this Chiboy that I met Biggy. I was trading on used shoes and my business was not moving well. So Chiboy called me that there is something that I was going to do. I asked him what it was, he said there was somebody I was going to drop food for and that I was going to drop food twice and that they would settle me. Therefore, I went there truly, he brought an Okada man (motorcyclist), the Okada man took me there, and I dropped the food twice.

He said that if I dropped the food there that he was going to call them. That if I dropped the food, I should call to let him know that I have dropped the food beside that bridge on that Kwale road. That when I dropped the food, they would come and take the food. I went there twice and dropped the food at that particular spot. They said they were going to give me N100,000. But the N100,000 I did not see it.
Were you not told who was kidnapped?I do not know the exact person they kidnapped. They did not tell me. I am a neutral person. My job there was to go and drop the food.
Did you not know you were doing wrong thing as the person was in the hospital?No, he said that his boys need food so I should go and drop groundnut, bread and water for them.
Why did he send you, why did he not drop the food himself?He is a leader. He said he wants me to, at least have some token in the business.
Which business are you talking?He said he had involved himself in kidnapping business
Which means you were told what they actually did?They told me.
Are you saying you do not know when you were dropping the food that you will be counted as one of them if caught?Yes, I knew.
So, why did you take part?It is because of my condition
What is your condition?
I am not living well; my business is not moving well. I needed little money to assist my business.
What we heard was that Prof. Okonjo was kept in your custody?No, no, no, I swear to God. I do not live in Delta State.
You have a house in Asaba?Of course, I have a house but I have checked out for a long time based on the rent. The house was too costly for me
You said you were neutral, then, tell us what Chiboy and others told you about how they kidnapped Prof. Okonjo?Until they rounded up their business, even up to date, I have not seen Chiboy. I was holding one of his numbers, but right now, the number is not going through.
There is no way you would be asked to go and drop food for somebody that was kidnapped without you asking or finding out the story of how the person was kidnapped. What  exactly were you told?
They only told me they have kidnapped somebody and that the person is at Kwale. That what I am going to do is to take the food to a particular bridge, that if I get to that bridge, I should flash him and he was going to call his boys. That if I dropped the food, I should not delay there. That I should drop the food, enter the bike immediately and move.
Were you taking bike from Onitsha to that place?No, he was the person that brought the bike, not from Asaba. I entered bus to Ibusa and from Ibusa, he would now bring the bike. The bike person, it seems, is his private bike man, so the bike person would now take me to there.
From the story that you have told so far, it seemed you were party to the kidnapping?I have involved myself already because of my going there to give them food, which has already made me a party. However, I do not know the exact person that they kidnapped but I have involved myself in this act.
You were arrested when you came to sell a gun?No, the boy that wanted to sell the gun ran away.
Tell us how sharing of money brought misunderstanding among the kidnappers?In bringing of food, he (Chiboy, the leader) told me to bring the food twice.
Did you buy food with your money?He bought it; he was the one that brought the money. He does not reside in one place. He promised that he was going to give me N50,000 each. So, I accepted to go and drop and collect N50,000 because it was an easy one. Therefore, I went there twice. However, when they brought the money I did not see him. The N100,000 they promised as my share I did not see. Who am I to go and challenge him?
How were you arrested?The police arrested me yesterday (last Thursday) because there was one of my friends, Chuks. He said that based on this Christmas period, that he does not have money and that he wanted to sell one of his pump actions. So he negotiated with one boy, so when the boy came, they were three in the car. He told me to go and inform them to drop and come out so that they would negotiate. I was to tell them to off the motor engine and that Chuks was waiting down there. Therefore, when they grabbed me, he ran away. In the process when I was asking what’s all about, I was arrested.
We learnt you also involved yourself in another kidnapping, what is your role in the new kidnap gang?My role was to be with the man in the bush. I was supposed to stay in that bush with the victim